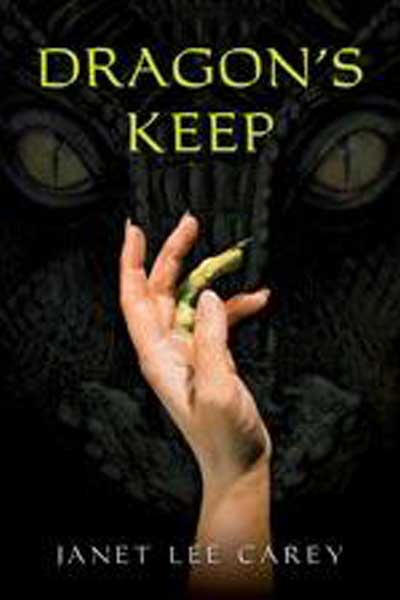 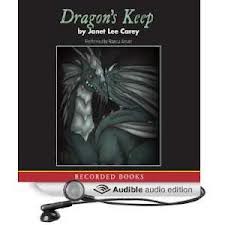 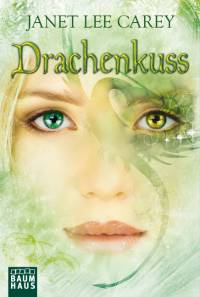 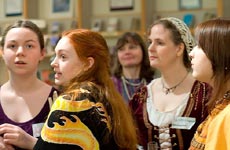 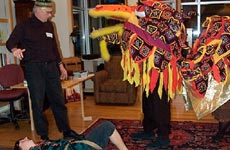 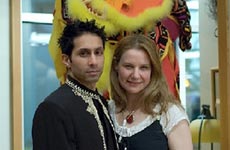 Far away on Wilde Island, Princess Rosalind is born with a dragon claw where her ring finger should be. To hide the secret, the Queen forces her to wear gloves at all times until a cure can be found, so Rosalind can fulfill the prophecy to restore the family to their rightful throne. But Rosalind’s flaw cannot be separated from her fate. When she is carried off by the dragon, everything she thought she knew falls apart. The dragon sees beauty in her talon where her mother saw only shame, and Rosalind finally understands what her mother has truly denied her. A stunning portrayal of the complex relationship between a mother and daughter in a lyrical novel sure to thrill readers who love fantasy—and those who don’t.

ALA Best Fiction for Young Adults

Mother pulled out her knife. We were alone in her solar.

“We’re together, Rosalind and the door’s well locked.”

“Tonight.” Then softening her voice she said, “Come, Rosie, take off your gloves.”

Her blade flashed in the firelight, which sent a russet glow across the room. She was ready for the ritual. I dreaded it.

“Take yours off first.”

Mother placed her knife on the table and bared her hands. Queen Gweneth’s fingers were finely tapered as candles, her skin milky as the moon. It was a shame for her to wear golden gloves, but she’d donned them at my birth to protect me, and worn them ever since.

I bit my lip as she removed my right glove. Pretty hand that never saw the sun with soft and creamy skin not unlike her own. Mother kissed it. Then taking my other hand in hers, she peeled away the left glove.

See the Wilde Island map in MAPS AND GAMES

“In stunning, lyrical prose, Carey tells the story of Rosalind, a twelfth-century princess destined for greatness by a prophecy from Merlin. END_OF_DOCUMENT_TOKEN_TO_BE_REPLACED

The twenty-first queen of Wilde Island, which is plagued by dragons, will do three great things. Rosalind is to be that queen, but because she was born with a finger that looks exactly like a dragon's claw, she always wears gloves of gold. If exposed, her deformity will mark her as a witch and spell her doom, so anyone who finds out about it has died. Her life takes a strange turn during the summer Rosalind is 16; she is plucked from the ground by a dragon and flown to its keep high in the mountains on another island to serve as nursemaid to its four motherless pips. Carey smoothly blends many traditional fantasy tropes here, but her telling is fresh as well as thoroughly compelling.

“A rich medieval fantasy, a splendid weaving of bright and dark threads, constant surprises and startling turns of events; of brutalities and beauties, terrors and triumphs. The spacious tale has, at its center, the enduring Princess Rosalind, whose golden glove hides a shocking secret and who finds herself caught up in the working out of Merlin’s ancient prophecy.
Janet Lee Carey not only creates a secondary world but one parallel to a specific historical era. So myth becomes history and history transformed into myth—a remarkable achievement.”

Nonstop action may keep readers glued to this page-turner, but strong writing and character development are what will make it linger in their memories long after they've finished it. Princess Rosalind Pendragon is meant to fulfill a 600-year-old prophecy from Merlin that she will restore her family's good name and end a war. Rosalind was born with one dragon talon, which is a fearful secret known only to the teen and her mother. END_OF_DOCUMENT_TOKEN_TO_BE_REPLACED

It is kept hidden by the golden gloves that Rosalind is never without, and over the years, the queen tries desperately to find a cure for the curse. When Rosalind reveals her claw to Lord Faul, a dragon that has been terrorizing the island, her destiny is set in motion. Taken by him to be nursemaid to his motherless children, she learns of her dragon blood and of her mother's treachery. Rosalind and the dragons are bound together in a complex relationship that, in the end, helps her fulfill the prophecy. Her heroic journey comes full circle, and she finds internal peace as well as peace for her people. While the story has roots in traditional fairy tales and legends, the author has crafted something new and magical, and unexpected plot twists will surprise readers throughout. Lord Faul and Rosalind, whose personality is a fantastic combination of Joan of Arc, Briar Rose, and Patricia Wrede's Princess Cimarron, develop so well as characters that readers will be touched by them. Devotees of fantasy adventure stories will certainly find treasure here.

“In addition to the writing, the fantastically multifaceted relationships among the main characters make this novel one that will easily hold readers attention.”

“Wonderfully imagined dragon lore and an elegant backstory connection to the Arthur Pendragon legend are woven with rich strands of mother/daughter, child/nursemaid, friend/companion resonance, and the dark-skinned, blue-eyed half-Muslim Kye is a worthy hero. ”

“Carey (Wenny Has Wings) has written a romantic fantasy steeped in the Arthurian tradition of knights, dragons and lost kingdoms. END_OF_DOCUMENT_TOKEN_TO_BE_REPLACED

After eloping with an outlaw, King Arthur's sister, Evaine, is banished to Wilde Island. Merlin, however, foresees a prophecy regarding the 21st queen in her future lineage: “She shall redeem the name Pendragon. End war with the wave of her hand. And restore the glory of Wilde Island.” Centuries later, Queen Gweneth (the infertile queen number 20) devours an egg stolen from the dragon, Lord Faul, in an attempt to conceive. When she does give birth, her daughter, Rosalind, is born with the “devil’s mark”: her left hand bears a claw in place of one finger. Rosalind hides her hands underneath golden gloves and Queen Gweneth repeatedly commits murder to preserve the secret. The lonely princess doubts any man will ever marry her, but when she meets Kye-a young knight who vanquished a female dragon that has plagued Wilde Island-she falls in love. Soon after, Rosalind is captured by Lord Faul (her true father) and becomes nursemaid to his offspring, known as pips. When one of the pips drowns, Lord Faul's tears quench his “inner fire,” killing him and ending Rosalind&fsquos capture. She returns to Wilde Island to claim her rightful place as queen, and though she is put on trial for being a witch, Rosalind’s “curse” ultimately becomes her triumph. Fantasy lovers will readily empathize with this brave heroine who learns to be true to herself.