Welcome to Creative Conversations. Today I’m talking with the author/illustrator and Mr. Monster-a-Day, Kevan Atteberry. In Bunnies!!! shirt and with me at his Puddles!!! book launch. 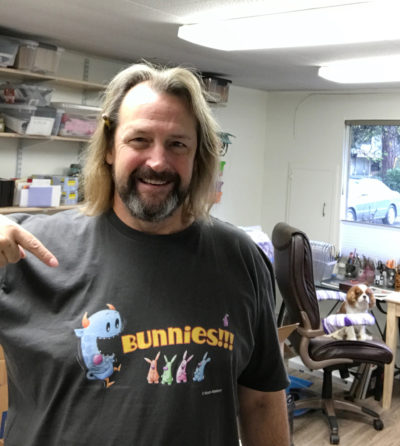 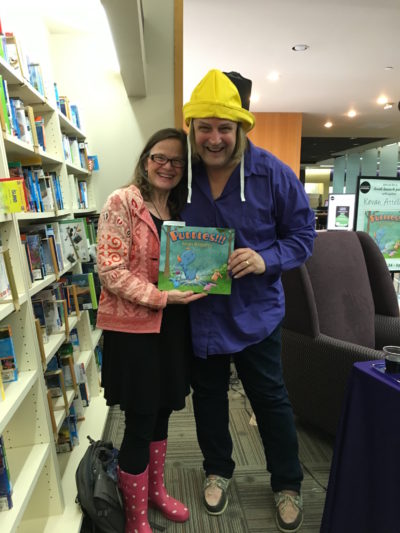 We’ve known each other for years through our terrific SCBWI Western WA network and through our awesome literary agents Erin Murphy and Ammi-Joan Paquette at Erin Murphy Literary Agency.
Kevan’s illustrated numerous picture books and more recently, authored his own. His newest three are: 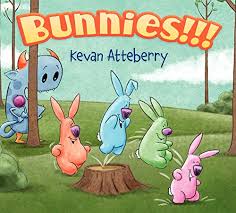 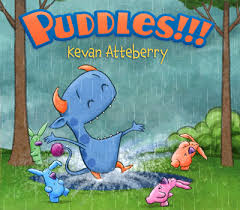 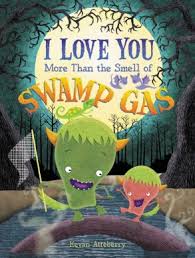 This month we’re giving away a signed copy or I Love You More Than The Smell of Swamp Gas to some lucky Dreamwalker. Check the contest out below. 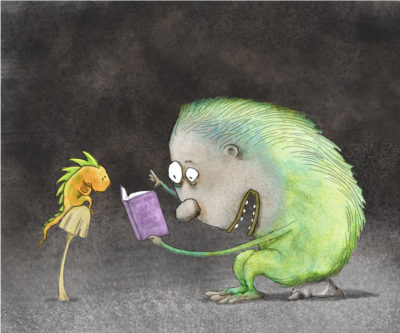 Janet: So, hey, Kevan, I’m curious about the challenge you give yourself to make a monster a day in October. When did you start doing that, and how’s it going?

Kevan: Hmmm, I started drawing a monster a day in October of 2011. It was an exercise in discipline and creativity for me. Posting them on Facebook also made me accountable. It went well for the first three years, but as life started becoming more challenged the last three years I was not able to fill out whole months’ worth of monsters. This was the year I was going to get back in the swing of thing, but I’ve been on the road so much of the second half I’ve fallen way behind.

Janet: Well, nobody’s counting. Speaking for myself, I get a laugh whenever I see one of them posted. I know if I gave myself the challenge of putting a page per day of my first draft up on Facebook — I’d go mad! So I’m in the cheering section for what you’ve done with this. 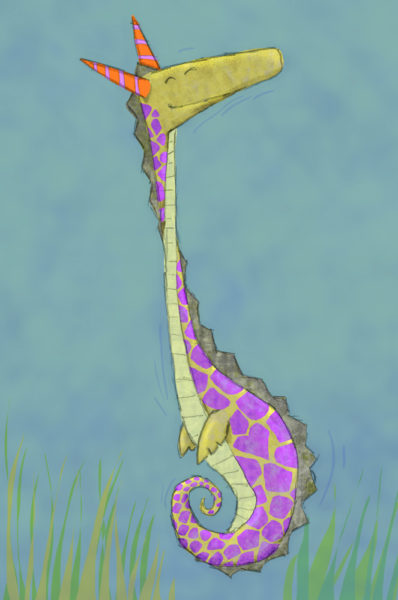 There are a few monsters on the webpage I have questions about. I see you did the illustration below on an interesting background using a written page. How did that come about? 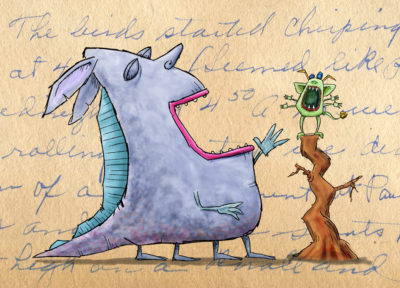 Kevan: In all of my illustrations, backgrounds are an opportunity to explore technique. First, you should know that virtually all of my monster-a-days are done digitally. So, I can add whatever kind of background I want to it. That particular one was a scanned page from a travel journal from the 40s or 50s. The handwriting was/is fluid and speaks of a different time and the paper it is on is rich with texture. I’ve used that particular scan—or bits of it—to enhance several illustrations. It is, like you said, interesting. And I think it frames the monster nicely.

Janet: Reading, “The birds started chirping” adds to the noisome monsters chirping. I cracked up when I saw the one below. 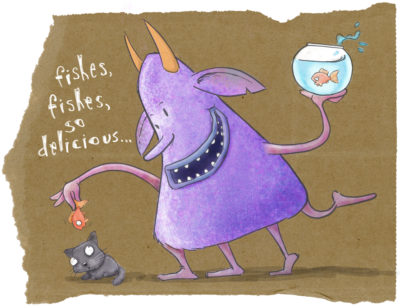 The cat looks doubtful indeed. Did you come up with the words first? Or did you do the drawing and then the words? Or . . .

Kevan: Nearly always the illustration first. In fact, I write my books that way. Image first, then that inspires the story, or in the case of a lot of my monsters, short rhymes or verse. 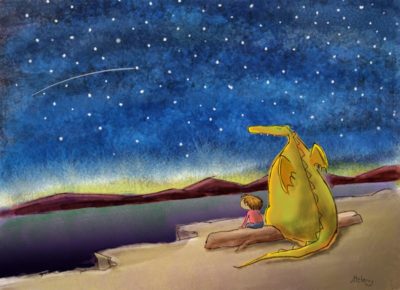 Janet: I know you’re on the road right now with your newest. Do you want to talk a bit about the evolution of I Love You More Than the Smell of Swamp Gas?

Kevan: Sure. Like the previous question, I had drawn a monster and a child monster in a swamp with butterfly nets chasing a skink. I have no idea where that image came from. That is the whole fun of Monster-a-day. Starting with a blank canvas and seeing what develops. When I drew that one it immediately began percolating in my gray matter. And just as quickly I knew it was a “how much do you love me” book. And I knew it would be different. And I knew it would not be syrupy sweet, rather a funnier look at that genre. It’s been done a hundred times and I thought I had an original enough spin on it to make it work. Apparently, I did. 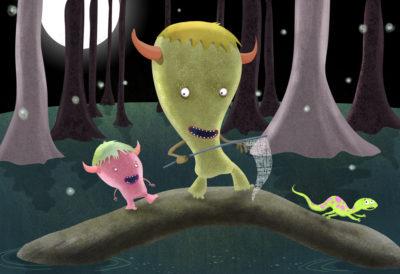 Janet: It’s in the collision of ideas when new thoughts come together that books are formed. It sounds like it happened all at once. It can be that way sometimes. The new spin is terrific. I also noticed a lot more text in Swamp Gas. And a lot of twists and surprises. Did that take a long time? Lots of revisions?

Kevan: Oh man…did it ever. Considering my first two books had about 48 words each, writing a book with the amount of text Swamp Gas had was a big awakening to me. Thank god for persistent editors (I’m talking about you, Jill!) Not only was it much longer, but it was in rhyme—which we are told from day one it will be very difficult to sell. Nonetheless, I was determined to write a rhyming book and succeed at it. It’s funny, in Bunnies!!! my editor had a one-word edit. That’s all. But we went back and forth and back and forth with Swamp Gas. And it is a much better book because of her.

Janet: I agree you created something remarkable. There are so many levels to the pictures and the story. So much happening on each page. One of my favorite textual details are the many ways the grown-up monster addresses the child monster as newtling, stinkling, drumling, ghostling and last as childling. When did you come up with that?

Kevan: Aw, thanks. I enjoyed making up the terms of endearment. It just kind of came to me. I was looking for different ones for each episode that worked with the artwork and scenario and it became easier to make up my own rather than find something that kinda fit.

Janet: Ah, the joys of wordsmithing! I’ve played with that in my fantasy works, from creating new swear words like detch or detching. “That detching dog won’t stop howling!” Etc. to crafting words for languages of invented peoples. Being auditory, I hear the words and know when they sound right.

Kevan: I LOVE “detch”! I will be adding it to my vocabulary! Ha!

Kevan: It certainly is! Making up words and having them picked up by others would be great. Hmmmmm…Note to self: Make up new swear words.

Janet: Many of your monsters can use them!

Kevan: Yes!! They can! I have the perfect vehicle to introduce new words. Heheheh.

Janet: Give me a slew of them to use next time I hit my thumb with a hammer.

Kevan: Exactly. The world needs them. I am now on a mission.

Janet: I’ve asked questions about your artwork and books, but is there something you’d like to share about your creative process that we haven’t covered?

Kevan: Not really…Although I am working towards doing more things in traditional medias rather than strictly digital. I’m setting up a new studio at home just for that. I’m kind of excited to get back into the more tactile art experiences.

Janet: What would be your first plunge?

Kevan: A mixed media plunge. In particular, I am experimenting with collage, which is unlike anything I’ve done before. But using collage, ink drawing, water-based paints, and unusual staining things. And trying new papers and implements…I just need to do some exploring. bosh

Kevan: I am having a lot of fun. But I need to find a way to incorporate it into a new book project.

Janet: I think a book will grow out of the exploration.

Kevan: I do too. Stay tuned…

Janet: I will. Thanks for the chat today. It’s been great talking with you, Kevan.

Kevan: Thanks for inviting me to share, Janet! I had a good time!

And now the Giveaway! Kevan has kindly agreed to give some lucky Dreamwalker a signed copy of

How to Enter. To those of you who are new to Rafflecopter, all you need to do is Log In using the “Facebook” or the “Use Your Email” button below. Click any of the three options. If you choose option 3, just type your first name and enter. You can earn more chances to win if you choose to tweet (The tweet is written for you ahead of time. You just need to click. Also, you need to click “I Tweeted” to confirm the entry). Or you can choose to leave a comment. Good Luck All! And may the best monster win!