Welcome to Library Lions special edition Banned BooksWeek ! One of our favorite posts of the year! http://www.bannedbooksweek.org/ 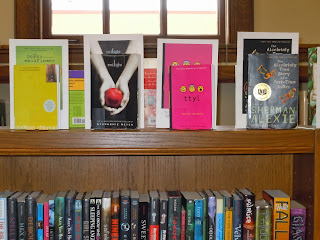 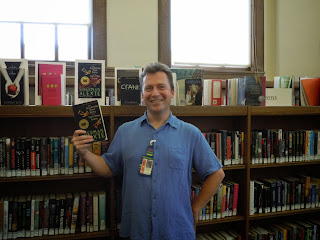 The Skinny: First tell us about yourself and your library
I’m a Teen Services Librarian at the West Seattle Branch of The Seattle Public Library. 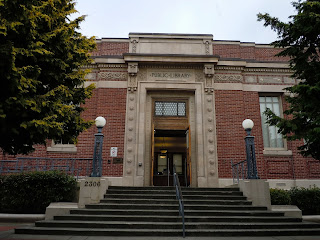 I’ve been working in teen services for 15 years and am proud to say I’m the last of the original hires when The Seattle Public Library began Young Adult Services in 1998.  There were seven of us hired to begin this service division, and the rest have moved into other areas of library service.  I was the teen booklist coordinator for a decade or so, and I’ve been an editor and writer for our teen blog, Push To Talk, since we began in 2007.

Tell us about Banned Books Week:

Banned Books Week is probably my favorite library-oriented celebration.  I try to read something that’s been banned or challenged every year around the big week.  I like picking up things that were challenged years ago, even if I usually cannot see what the fuss is about; the perspective time gives us illuminates the transitory nature of values, beliefs, and mores, things we usually think of as eternal.  Last year, I read Kate Chopin’s proto-feminist classic, The Awakening.  What seemed to be the issue was her independent mind, her willingness to leave her family behind to pursue her own desires.  She’s a selfish woman in many respects, but her rebellion against her society’s strictures still holds a charge.  This year, I’m rereading Allen Ginsberg’s long poem, Howl.  I recently watched the film adaption with James Franco as Ginsberg, and really liked how it opened up the poem with a dramatic version of the obscenity trial and animations in conjunction with long sections of the poem.

Can you showcase some displays for us?

My branch, an old Carnegie library, does not serve displays well, and I’ve often let it slide, at least in my teen area.  This year, though, my teen volunteer Lexie and I put together a sort of Top Ten Banned Teen Books.  We display each of the books face forward along with a short annotation, a list of the reasons why it’s been banned or challenged, and a six-word summary for readers who just can’t wait any longer to get their hands on the book.  I’m also including the other displays we did this year for adult and children’s materials. 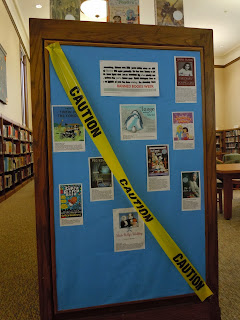 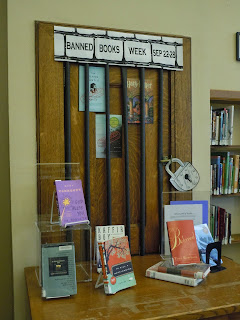 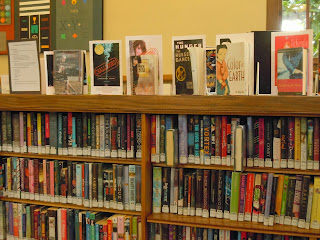 What do you do to spread the word about Banned Books Week and Intellectual Freedom Issues?
For many years, I worked with our local theatre group, Book-It Theatre, to bring one of their Danger! Books programs to the middle school I work with.  They would perform a section out of three challenged books (line by line, including the little parts like “he said, she said”), full of drama and gestures and even funny voices, if the piece required it.  The students were always hooked on these performances, and then we’d have a short discussion afterwards beginning with a reading of the First Amendment and then moving into the reasons these books were challenged and how it was always a complex issue, because of people’s different values.

Seattle Public Library has a podcast of one of these performances, from 2009, here: PODCAST

I also write for our teen blog, Push To Talk.  Last year, I created a series of posts that featured a different teen title each day of Banned Books Week. Push To Talk Banned Books

Readers Roar: Let’s hear what kids and teens have to say about banned books 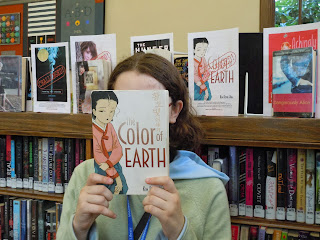 [This part is from Lexie, my teen volunteer, 15 years old.]

Libraries are an essential part of our culture because they grant everyone access to books and media that are expensive or unavailable otherwise. Libraries form a community and encourage others to read. They are a vital support for those who wish to learn and a resource for all ages. Books can be anything you’re looking for, or something completely unexpected. They can be friends, teachers, a hiding place, or a way to express who you are. Books open a gate to other cultures, build a path to other worlds, take you back to your roots, and then lead you home, a slightly different person. I believe that books are a necessary way to explore the limits of imagination.

When a book is banned, it doesn’t protect people from bad ideas, it locks the door to a separate story. People shouldn’t be able to define “good” and “evil” for everyone else*. It’s your own job to establish your morals and values, and everyone has to do this themselves. Forcing your own on someone else is like taking away their opportunity to be their own person. People should be free to warn others and discourage them from reading certain books, because that’s free speech, and some may heed that. But they should be free to form their own opinions, whether they agree or not.
*This leads on to ethics, agreed-on morals, and global consensus. I will leave my rant about this untyped and simply thought.
Any Banned Books you would like to highlight?

Even though I’m a teen librarian and I live in the same town as Sherman Alexie, I’d like to highlight Dav Pilkey’s series that starts with Captain Underpants. 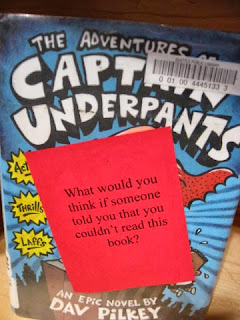 This series has done more to promote a love of reading among a certain age group than any other book or series I can think of.  Little kids – boys and girls – just love a book that uses words like “fart” and “poopypants.”  Their parents will often roll their eyes just a bit, but if I ever meet a really young, reluctant reader with a frustrated parent, I direct the family to Captain Underpants, who consistently saves the day.

What can Library Lions blog readers do for Banned Books Week?
Pick up a title that’s been challenged, especially in your community, and read it.  Read it with no expectations of liking it or disliking it, wanting to protect it or wanting to ban it.  It’s OK.  Just enjoy it for what the author intended.  I like the older titles for perspective, as I said, but the current targets need support too.
Library Lion’s Roar: ONE LAST BIG ROAR

IFACTIONlistserv. I get the daily digest of news headlines in my email.  The moderators categorize the news into different sections, highlighting all the different ways our access to information, knowledge, discussion, and the workings of our government and media are supported or stifled.  Even if you don’t read all the articles, a scan of the headlines gives you a good idea of what’s going on in the world and who wants to control what information you can access.

Thanks again for the terrific Banned Books Week interview, Wally, and thanks also to Lexie for her contribution!