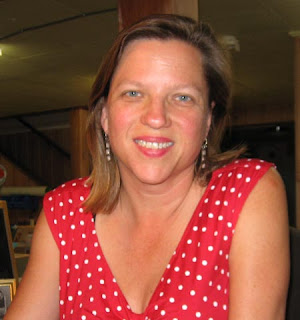 First a bit about our Guest:
Lynn has worked 10 years as a Teen Services Librarian. She says, I am the luckiest librarian because of my colleagues at Ballard Branch. We work in concert to serve 1000- 1500 patrons a day at the busiest branch library in Seattle. Serving a teen well means being sure you already served them as children, serving their parents, serving their teachers, schools and community, and being prepared to continue to serve them as adults.

Tell us about Banned Books Week:
Every year in September libraries and book stores have the unique opportunity to remind their patrons of how precious their 1st Amendment right is by celebrating Banned Books Week and the Freedom to Read.

It is a time to feature Big Ideas, stir up conversation, even controversy. When each person stops to think about it he or she has a unique idea of what the 1st Amendment means.

American Library Association is a professional library organization that established and supports Banned Books Week in lots of ways. 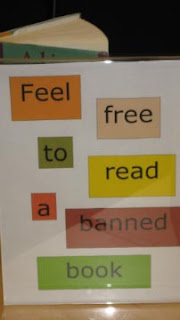 What is your library doing for Banned Books Week? 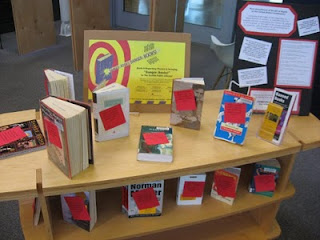 We always do displays at the front of the library. But these are not passive displays! 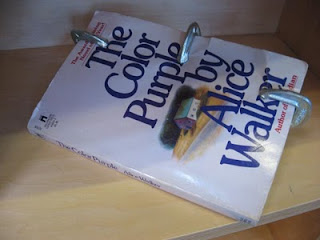 Do your homework and be prepared for discussion. In some states or in some library settings, a Freedom to Read display might in itself be questioned or censored. 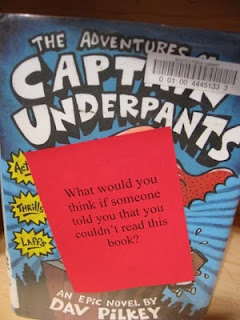 A display can be as simple as a collection of banned and challenged titles with custom Post-it notes on them, such as, “What would you do if someone said you couldn’t read this book?” (There is a Glue Stick product that can turn any piece of paper into a Post-It note.)

A few years ago, a librarian took some poor condition gift books that would have been recycled and altered them for a display that has turned out to be the biggest conversation starter imaginable. He put a copy of Harry Potter in a jar; he bolted them, locked them up, etc. This has stopped our library patrons in their tracks. 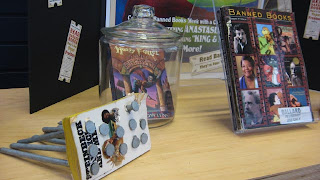 This year Book-It performed selections from On the Devil’s Court by Carl Deuker, Olive’s Ocean by Kevin Henkes and The Land by Mildred Taylor at Salmon Bay School, my neighborhood school.

Following the performance 250 7th & 8th graders discuss censorship and the 1st Amendment. Each year after the discussion ends, I am re-inspired by these young minds and am proud to be a Teen Services librarian.

Any Banned Books you would like to highlight?
Geography Club by Brent Hartinger is a title that appears on the most recent list of Challenged and Banned books. Very well-told story. And scary. And powerful. We have countless books on our shelves of heterosexual romance among teenagers. But this story crosses the line and tells a different kind of story, equally real.

I mention it because I am proud of the West Bend Community Memorial Library, West Bend, Wisconsin for retaining it despite a month’s long campaign to remove. Both sides exercised their 1st Amendment rights. This is how the discussion should take place in a community. Fortunately, the book was retained and readers were able to then choose to read it or not read it and decide for themselves.

What can Library Lions blog readers do for Banned Books Week?
How to celebrate Banned Books Week?
For myself, I try to read and understand a little more each year about the issues of censorship. Intellectual Freedom is central to our work. As you get sensitized to the subject, one reads the news with an eye to how infringements on the Freedom of Speech and Freedom to Read play a bigger role in our life than we might at first think.

I also make a point to read a challenged or banned book each year. There are so many to choose from! Most amazingly great literature.

For a Library? Make a display of banned and challenged books or create a booklist. If you have time and support for programming: invite community members to read Banned and Challenged books or organize a discussion led by your local chapter of the ACLU.

Readers Roar:
Middle school and high school students are at a wonderful age to think about and appreciate their rights. Their first question is “That was banned?” Followed by “How can a book be banned with the Internet?”

Pretty soon they understand that our 1st Amendment allows us to challenge books and also protect books from being banned. Rights get complicated very quickly. They love speculating about the subject of censorship!

Library Lion’s Roar: ONE LAST ROAR FOR BANNED BOOKS WEEK
“After Danger: Books! performed at Salmon Bay School this week a 7th grader from the school came into the library. He recognized me from the morning and thanked me for the presentation. Then said: “I think I would like to read On the Devil’s Court.”

Thank you, Lynn, for the Special Edition for Banned Books Week!