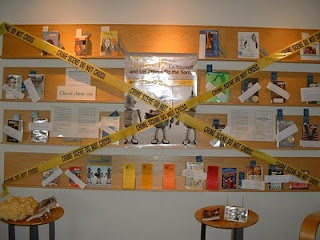 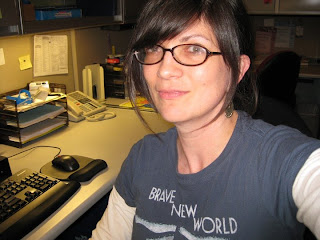 The Skinny: First tell us a little about yourself and your library 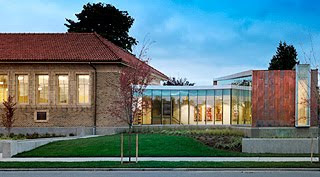 We have an awesome after-school Homework Help program at my branch, thanks to the amazing volunteers who spend two to four hours each week helping students of all ages. The students deserve a lot of credit, too, for wanting to learn and for helping each other. I keep things bubbling along by orienting the volunteers, organizing the schedule, etc.

I’ve been a librarian for eleven years. One of my favorite things to do is visit schools to do presentations on information literacy and the research process. Sometimes classes of English Language Learners or special education students visit the branch for a presentation on “How the Library Is Organized.” I also love doing good old-fashioned booktalks and enjoyed working with a nearby school where I taught students how to do their own booktalks so they could share their favorites with their classmates. 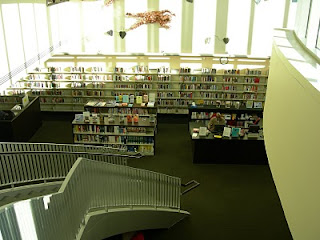 For many years, several branches worked together to hold a “Reading Marathon” that pitted four middle schools against each other to see which could log the most reading time in a six-hour period. Because of budget cuts and staff reorganizations, this year the competition was between the three grades from one middle school and held at just my branch, but the participants still had a great time eating snacks, winning raffle prizes, and, of course, reading.

Tell us about Banned Books Week: 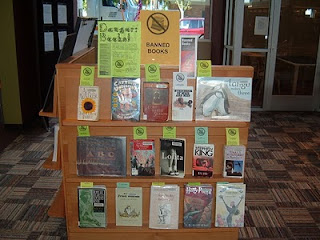 Banned Books Week is that special time of the year when librarians get together and ban as many books as possible…just kidding! (Although teens are sometimes confused by the name.) The serious fact is that every year books are removed from the shelves of libraries when library staff responds to patrons’ official complaints by choosing to censor. Librarians and other educators who consider themselves staunch supporters of the First Amendment want to bring this to the attention of the public so they can appreciate their Freedom To Read. It’s also a great opportunity to examine the issues and emotions that prompt those complaints and the prices we sometimes pay for having the freedom. 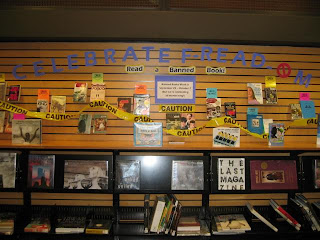 It surprises some students to learn that there are books I hate—but I make it clear that I’ll defend the rights of those books to be on the shelves of the library with my last breath. That’s what makes the Freedom To Read so powerful: it’s not a simple or easy thing to defend, but it’s worth it. 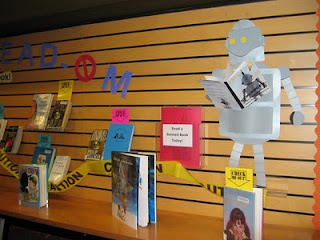 Can you showcase some more displays for us?
There are great displays at every branch of The Seattle Public Library system. 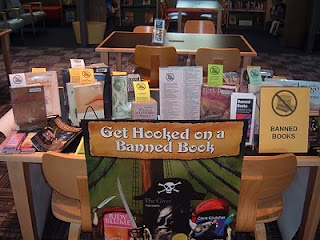 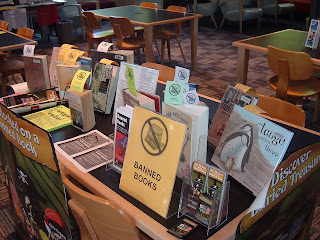 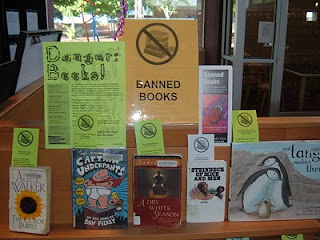 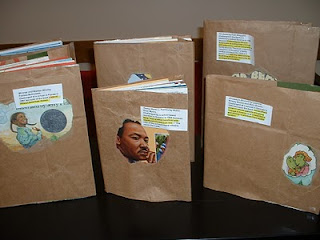 What do you do to spread the word about Banned Books Week and Intellectual Freedom Issues?
When teachers invite me to do a presentation on intellectual freedom for their classes, I do a lesson on the “competing goods” of the Freedom To Read. I start by showing the students the text of the First Amendment and then I show them a newspaper photograph and tell them this is a picture of the First Amendment in action. We discuss what’s going on in the photograph: an African-American woman is crouched defensively over a white man who became the target of a group of violently angry people who turned up to protest a Ku Klux Klan march. Why would this woman protect a Klan member whose speech is filled with such hate for her race? Because she believes in his right to speak, no matter what he’s saying. The protesters have an equal right to voice their opinion, but not to silence his. It’s a compelling image that helps students understand the gravity of defending free speech, even when you completely disagree with it.

Next, we do an activity that involves small groups of students looking at children’s picture books that have been challenged in the past and guessing what the challengers objected to. We use picture books because they’re easier to flip through than young adult novels, they lead to a later discussion about age restrictions, and they elicit cries of, “But I love the Lorax!” By the way, I want to give credit to the Multnomah County Library System librarians—I observed a version of this activity led by them at a conference and adapted it.
PHOTO cover The Lorax

Some of the reasons for challenging seem silly to the students (such as the bottle of wine in Little Red Riding Hood’s basket for her grandmother leading to alcoholism) but others are more serious (such as the use of racial slurs in Roll of Thunder Hear My Cry). The important thing I want students to understand is that they all represent someone’s personal values. Whatever their personal values are, the students always bring up the point that it’s good to have books that represent different opinions. If we removed every book that offended someone, there would be no books left on the shelves! The students also agree that that depicting a particular behavior doesn’t necessarily condone it and that it’s better to show reality as it is, rather than trying to shield readers from harsh truths.
We do a couple of other activities during this lesson and I’d be happy to share them, as well as details about the activities described above.

Any Banned Books you would like to highlight?
I’d like to highlight some hometown heroes. Three local (Seattle or Seattle-adjacent) authors of books for teens are represented in the American Library Association’s “Books Banned or Challenged in 2009-2010” booklet: Sherman Alexie, Brent Hartinger, and Richelle Mead. Alexie’s The Absolutely True Diary of a Part-Time Indian was challenged but retained on a school summer reading list. (It’s important to note that many challenges fail to lead to a banning.) The objections focused on “vulgar and racist” language. So many teens, especially boys, have read and loved this book.

You could have a great discussion about the difference between being racist and depicting racism with these readers. Hartinger’s Geography Club was retained at a public library despite complaints that it was “obscene or child pornography.” (In 2005, it was banned and then reinstated by a nearby school district, although the focus that time was a scene in which the protagonist arranged to see someone he met online.) This book also provides a great opportunity to talk about the difference between gratuitous sex scenes and sex scenes as an important part of the plot—or, in this case, books in which characters think about sex but don’t actually have it but are still considered “pornography.” 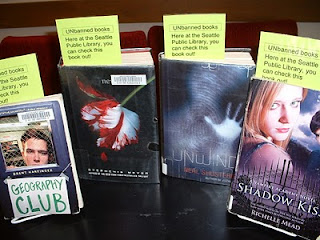 Mead’s entire Vampire Academy series was banned at a junior high school for “sexual content or nudity,” including books which have not yet been written. It’s true that schools don’t have the same responsibilities as public libraries to protect the freedom to read, but that doesn’t mean they should go ahead and ban books without reading them first!

What can Library Lions readers do to roar for Banned Books Week?
Support your local public library! We love our volunteers and appreciate every penny that’s donated, but most of our essential functions can only be funded by the city or county government’s budget. When times get tough (as they are right now), tough decisions have to be made about those budgets. It’s crucial that city and county governments know that public libraries are a vital service to their communities.

Yes, a lot of people get their information online these days, but where do people go when they don’t have computers or the skills to navigate the increasingly complex world of online information? The library, of course. We are actually more needed than ever. Our buildings are bursting with job-seekers, recent immigrants, and students of all ages who need help with their homework. They may be the only places where children hear stories read to them, elderly people figure out how to use a computer mouse, or someone who’s having a bad day sees a smile. And our local governments need to know all this so they don’t put us in the same pile as the parks and the art projects that are awesome but tend to lose their funding more rapidly than the police and fire departments.

One More Library Lion’s Roar:
I’d also like to put in a plug for the profession of librarianship, which seems especially relevant at a time when we’re celebrating the First Amendment. It’s true you don’t need a master’s degree to do a lot of the things we do these days (if I had a dollar for every printer I’ve un-jammed, I could have retired by now) and that what we bring to our work is somewhat intangible. But intangible doesn’t mean unimportant. Librarians hold back the forces of censorship with one hand and welcome everyone—and I mean everyone—into the library with the other. Without us, freedoms would get chipped away, both the freedom of ideas to enter the public space and the freedom to gain access to those ideas, regardless of your skills or resources. Interest in those ideals led me to library school and by the time I left, they were tattooed on my soul.

Facebook: https://www.facebook.com/SeattlePublicLibrary?ref=ts
Thank you, Lesley for your terrific interview!