Welcome to Library Lions interviews Raising a Roar for Libraries and for the outstanding Librarians serving Children and Young Adults in Schools and Public Libraries across the U.S. Please Roar today’s guest Kirsten Edwards! 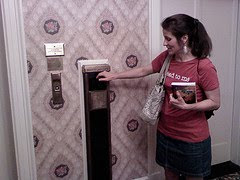 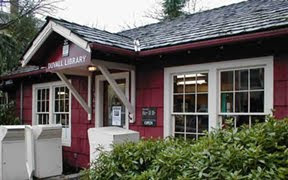 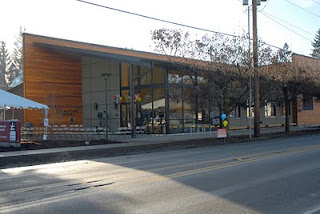 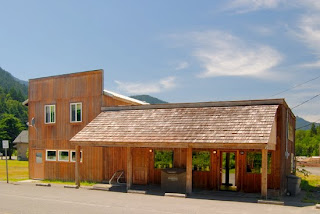 Kirsten’s worked as a librarian for 15 years. In that time she helped found the Printz Award, (having had the honor of being on A.L.A.’s Printz Award founding committee), she’s been active in Washington State Library Assoc. (WLA), and is proud to be co-president of the
Society Gaius Julius Solinus, an ancient library humor society.

She’s particularly proud of the paper she presented, “”Addressing the Balance of Gender Diversity in In-Building Early Juvenile Text-Media-Based Library Presentations” And Kirsten was the first ever Librarian Guest of Honor at a Science Fiction and Fantasy Convention! 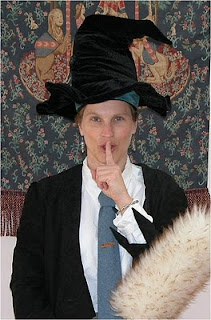 The Skinny: How did you become a librarian, Kirsten?
I’m a failed scientist. Seriously, I bombed advanced microbiology (A+ on the class work, D- on the lab work – and it was a pity “D” because the prof felt sorry for me). I took one of those extensive “what should you do with your life” studies at the career center and got a tie for first: scientist & librarian. Since I still own My First Reference Book ™ I figured I’d give librarian a shot. I’ve never looked back. My best friend, Lorraine is the one who lured me over to the Fun Side of The Force in library school and I pursued youth services instead of special librarianship.

Being a public librarian specializing in teens (and earlier in my career, kids and teens) is the bomb: you get all the run-and-find-out reference fun in the small branches, and your customers are so much more lively, enthusiastic and yes, fun than grown ups. Seriously: in what other profession can you team up with a group of teens and build a Read-inator for the library’s entry in the Duvall Days Parade? 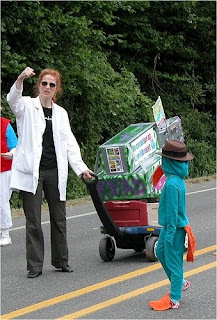 I also get to Talk Books with people for a living (in librarian-speak that’s called “readers advisory” which pretty darn blessed. I publish (with the other librarians at KCLS) monthly favorites at my library systems Librarytalk. I’m “Kirsten at Duvall.” Here’s my latest talk

One of our library customers recently approached us with a bag full of books to return, and pulled out a small, somewhat elderly board book.

“I need to “fess up,” quote she, “I caught my daughter peeling the cover back–almost off. So I got some acid-free glue, glued it back on and let it sit between weights. Here.”

I took the book from her and examined it: “Nice work!”

“Well, I just wanted to you to see it, in case you wanted to charge me a fine or something.”

“Oh no,” I replied. “Normally, we try to discourage patrons from doing home repairs, but this is splendid: very nice indeed!”

She left, and I checked in the book, and what message should, before my wondering eyes, flash upon the screen?

Heh. Small town libraries are the best, and my customers rock. 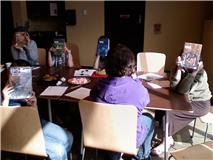 What makes this last one so cool was that, like most RPGs I’ve run for the library, it was a special kinda one-time event. Even a pretty good moderator can’t really handle (well) more than 15 players at a time, and with teen players, who may need to be brought up to speed on the game system itself, that becomes a hard maximum. That’s a lot of work to put together for just a few kids. I got away with it for three or for summers at Skykomish where the total teen population averages, say 30 by reporting that “1/4 of the towns teens attended…” but eventually The Powers that Be caught on. Last year I was able to run a “return to Hogwarts” RPG using a game my friend (writer, gamer) Steve Jackson had devised for his children. The teens had a blast and really wanted a repeat—but I couldn’t justify the time sink for just 12 teens. So one of the girls who played the game (and yes, my gaming programs—video and tabletop—regularly run 50 – 75% female, so the notion that Girls Don’t Game is bogus) stepped up and offered to run another “episode.” For this young lady, who writes Harry Potter fanfic, gaming is like making the best fan fic ever—and I’m happy to be mentoring a whole new generation of girl gamers.

Reaching Readers:
Mostly, as a teen services librarian, I booktalk. I do it in the library (where we call it “readers advisory”, at the schools, at the grocery store (“Hey—you’re the library lady”) anywhere anyone (teen or parent) is willing to “talk book.” While the presentations at the schools are a form of storytelling—meaning I block out my actions and gestures, write a starting script, plot interactive group reads—the one-on-one deals usually start with “tell me what kind of stories you like” whether it’s in book form or T.V.

I’m all about the story me, and I have to admit that in my secret of hearts I know Books are Best, and there’s something on the printed page for everyone (“Every reader his book. Every book its reader” –Ranganathan) I know that for some people, different media reach people differently. One of the great things about the explosion of manga and graphic novels in the U.S. is the way this format reaches people who prefer video as their story-delivery-media. They’re turning out to be a fantastic gate-way drug into serious book reading–!

Readers Roar:
So, one of the middle school teens who comes to Pizza and Pages decided that once a month wasn’t enough and decided to form her own book club. She sent me an e-mail over Christmas to let me know how her project was going. My favorite excerpt:

“This Monday I just had my second meeting! We were reading “The Kin: Suth’s Story” by Peter Dickinson, and we went out into my back yard and built a fort. Two more people have joined! ”
–Alison G. grade 7

Book Brag: What are the Top Three with your Teens right now?
~Well, there’s The Hunger Games which would be topping the NYT best seller list if they hadn’t in a fit of awesome lameness, decided to exile teen and children’s lit from their lists. Take American Idol cross it with Survivor and make it to the death. Then tell it from the point of view of two teenager who are having to fake being in love with each other (except that he’s probably really gone on her and trying to survive it) so that they can work the ratings—and survive the Hunger Games. Well, until the very end, when they’re going to have to try to kill each other. Only one contestant can make it out of the Games alive, after all…

~Bride of the Water God is a Korean graphic novel – a “manwa”—which is spreading steadily among my local teen readers by word of mouth. The art is stunning and the beauty-and-the-beast storyline is very appealing. The heroine has been thrust into an alien world of gods and demi-gods as the bride of a petulant, little-boy water god. She was sacrificed to bring the rain, and save her village. By night she’s visited by a handsome and enigmatic young man who is slowly winning her heart as a fellow “slave” captured by the capricious deity. Unbeknownst to her, he’s actually her husband: he’s trapped as a child by day.

~Another book with a long wait list is The Maze Runner in which Thomas wakes up in an elevator with no memory of anything but his name. The elevator rises, the doors open, and he finds himself in “the glade” where a group of similarly amnesiac boys. They tell him that the glade is surrounded by a high walls and a maze. By day, they send out Runners to chart the maze. By night they must be safely back in the glade before the doors shut off the maze or be destroyed by terrifying monsters, and shifting walls that re-create a new maze pattern every day. Thomas is intriguing, the mystery of the maze is intriguing, and even when you think you know what’s going on, it turns out you don’t.

Author! Author!
Add a mix of teenagers who are primed by their own interests and experiences to share what the author does and loves. In my “best author visit ever” this was me bringing Charles De Lint to the High School honors students/art students. 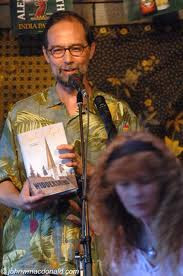 The honors students were readers and thinkers—a chance to hear one of the great modern American illustrators talk was a rare treat. The art students were getting what for many of these small town kids was the first chance to meet and hear from someone who’d done what they were (maybe) only dreaming of. I think school librarians and school teachers have a better chance of getting the author and audience to meet each other halfway than does the public librarian.
But every so often we have the opportunity to bring interested teens and relevant creators (authors, artists, musicians) together; and when we do, it’s magic.

Library Lion’s Roar: Any last words Kirsten?
I’m really proud of the way I piloted using VPN technology and our staff laptops for small scale but powerful outreach. One librarian + one laptop + a box full of handouts, targeted media and library cards = nanoBranch of the King County Library System. I did a dry run at a small literary science fiction and fantasy convention (Foolscap) then after about a year and a half of “proving” the technique and working through the bureaucracy, I got to use it the way I really wanted to: taking the library to the high school lunch room.

I and one of my branch managers (Lead library assistant Ronni Brown) had a library card drive / nanoBranch for two days during all three lunch periods at Cedarcrest High School. It was a smash hit—we’re invited back this fall. I’ve attached a photo of Ronni signing up one of the high school students for a library card. We checked in books for teens, checked out books, I brought the current Evergreen Award nominees, answered reference questions, and placed holds, too. 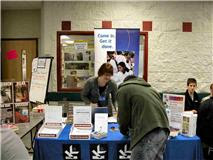 Thank you, Kirsten for the terrific interview!

~Blog readers. Do you Love Libraries? Give a Roar in “Comments” below.

~Note to Librarians: If you’re a Youth Librarian working in a school or public library we’d love to hear about you and your library. Email Janet on the Contact page on this website for an interview.