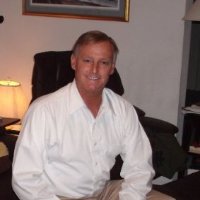 My stepbrother, Brett Strawbridge Ph.D., passed away June 6th 2015. Brett loved the outdoors as you can see by his account of the climb he made up Mt. Whitney in 1999. Our family donated to Nature Conservancy in his loving memory.

“Yeah, most people just go straight up it,” Frank the guide says. I look to the West, to the snow field that slopes steeply up to the ridge that was now beneath the setting sun. I ask him how high the ridge is above us.”Right about 13,000 feet,” is his reply. I look at it again over his small tent and beyond the rocks that jut out of the ground around us, like truck size teeth, almost buried in the jawbone of the mountain. These rocks that will give our small backpacking tents shelter from Mount Whitney’s night winds. I judge Frank to be in his middle forties. His tanned weathered skin and the general appearance of his strong compact body speak of numerous climbs.”You go up that face and then turn right, along the ridge, behind those pinnacles, and up to the summit,” he explains. “A good time to start is eight, nine in the morning. The snow isn’t too icy then.”

Earlier is bad, I assume is the guide’s implied advice. I am glad to have it. It’s free to me, since I did not hire him. The couple I met when I first arrived at this trail camp did. This man and wife look to be in their fifties. They are telling me about their just completed trek to the top. The man’s name is Rich. His wife’s name is Nancy. “Use a lot of sunscreen on your face. The glare from the snow is really strong. Put a lot on, and reapply it often,” Rich asserts. “We really used the ice axes going up that slope, there,” Nancy says. “I think walking poles would have been better,” she concludes.

Walking poles are similar to ski poles but are adjustable for length. This is useful if you are walking for long periods across a slope. The pole on the uphill side can be adjusted shorter and the downhill one adjusted longer so you can keep your shoulders level as you go.

I began the hike early this morning, after parking my car and camping the night at the trailhead. That is at 7,000 feet elevation just above the small town of Lone Pine. The trail rises from the parking area near the trailhead store and climbs through sections of the valley with wonderful views of small glacial lakes. 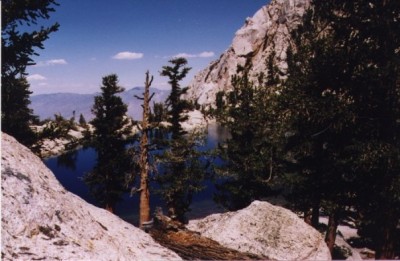 At about 9,000 feet elevation, I pass a sign that reads, “PERMITS REQUIRED PAST THIS POINT.” The US Forest Service began the permit system so they can regulate the number of hikers on the mountain at any one time. This is necessary in a State that has 30 million inhabitants. There is limited camping space at all the camps along the trail and camping outside of these areas is discouraged.

At about 10,000 feet the trees thinned out and nearly all vegetation stopped entirely by the time I reached the last trail camp at 12,000 feet. This is the last stop before the summit of the mountain, 2,500 feet above and to the North of us. Most people hike the trail in small groups of companions traveling together.

At 12,000 feet the sky is different. It’s clean and deep royal blue. It’s clean! Down in the valleys, the air is dirty, dusty, and full of chemicals that are naturally reserved for erupting volcanoes, but now blanket most of the low lying areas near cities. Up here the air is clear and almost free of dust. And it’s cold. As I breathe in the July air, it chills the inside of my nose as it rushes down into my glad lungs. This is air as the body was made to have it! The vision of the still lake across the canyon bottom is a wonder. The reflection of the peaks in it is so clear that the image is mirror perfect. The canyon winds away down from us to the valley on the eastern side of the Sierra Nevada Mountains in California.

I talk to the occupants of the two adjacent tents at the camp and to two people on the trail. I am tired at the end of this day, too tired to waste time with very much idle chatter. Pleasantries are exchanged in passing but people mostly just go about their business. The night air is frigid. I enter my sleeping bag. I am asleep as soon as my head hits the “pillow” of my rolled up parka.

I begin the ascent up the last 2,500 feet after a breakfast of nuts, Fritos, and bouillon. I start at about 10:00 a.m. The steep slope is covered with snow to the depth of at least six feet. I try traversing the slope in a switch back fashion, and discover why the guide and most others climb straight up the slope: walking across a slope this steep causes one to slip down the slope about as much as one climbs with each step. It makes for extra effort. Climbing straight up is hard, but it is still easier than the traverse.

If before 9:00 a.m. the snow is icy, by 11:00 when the sun has risen to mid morning, the snow turns to slush. Clearly this is what has happened by the time I am halfway up the thousand foot slope to the ridge. Apparently there is an optimal time to climb a snow slope: when the snow is not too icy but is still firm enough for good climbing. I am exhausted when I reach the ridge. I rest for half an hour, then start off on the last fifteen hundred feet to the summit.

The trail approaches the summit from the south west, covered with patches of snow several hundred yards across. Nothing grows here. There is only granite under the snow. I see a most wonderful sight when I am still perhaps a thousand yards from the top: There is one face of the mountain covered with ice spires made by the sun and wind. I lay down on the granite to get a ground level look at the spikes of sculpted ice. Tens of thousands of these spires stick straight up about a foot from the surface of the snow. My camera is out and I fiddle with f-numbers and focal lengths to compose the best shot. The sunlight is just right to make the spires really sparkle. “Helloo!” I roll over to see who it is calling to me. It is a man with rather long gray hair, wearing a skin tight skiing suit and sparkly Adidas running shoes. In each hand is a walking pole, and strapped to his back is a small day pack and a camera case. I say I was trying to get a photo of the ice. He replies, “I don’t know what you call these in English, but in Austria, where I am from, they are called —,” some guttural phrase that is lost on me. “In the Andes they have them maybe two meters tall, yes? You must go around them, not through them. They are too big!” We examine each other’s camera equipment, and then part ways. In an hour like a year, I reach the summit.

Dan, a fellow that I met yesterday along the trail up is already here. “Did you see that fellow with the running shoes and the racing suit?” Dan asks. “He’s fifty-eight years old, and is practicing for the Low-High race. That’s one from the lowest point in Death Valley to Mount Whitney. It runs from the lowest point to the highest point in the contiguous United States. It’s over a hundred miles from start to finish,” he explains. And with an expression of wonder on his face, says, “He must be in some kind of shape at fifty-eight to do that! He said he runs these kinds of races all over the world.” I am amazed too.

Also at the summit is a stone house, built in 1909 by men who brought all the supplies up to the summit by mule train. What a task that must have been. It gives shelter from the frequent violent storms here.

I expect the descent back to camp will be an uneventful walk for a tired hiker. But the steep snow slope has yet to be descended. I have a choice of descent methods: I can hike down, trudging through the snow, step by step or I can glissade down, sliding on my backside with my pack trailing behind me. I choose the glissade. I figure it’s faster.

I sit myself down in one of several troughs made by hikers sliding down the snow earlier. I discover I am sitting on solid ice where a few hours earlier the snow was slush. Since the sun has now gone far to the West, the slope is now in shadow and the snow has refrozen. I begin to slide, accelerate to breakneck speed, and careen down the frozen trough like a bobsled rider, thinking, “I could be killed!” I flail the heels of my boots and the palms of my gloved hands at the ice in the trough, trying to get them to dig in enough to slow me down. I have little success, but I manage to stay in the trough. My feet finally dig in as the slope begins to lessen. I slide to a stop near the base of the slope. I survived! I glissaded down six hundred feet in just a few moments. I took an hour to climb up that same place that morning. I check myself for damage. I find that the underside of my right forearm has a neatly cut gouge in it from the ice at the edge of the trough. I imagine a piranha bite might look the same. I don’t feel any pain from it and there is little blood. Perhaps it’s too cold to bleed?

I walk back into camp just as the day is ending, the sun is just about to set behind that ridge above the frozen slope. I learned much about hiking at higher elevations. I consider myself lucky that a bad sunburn and a gashed forearm are all that befell me. I feel good. I want to do it again–but not just right now. Maybe next year. All I really want right now is a fist full of Fritos, some water, and to get into my sleeping bag.