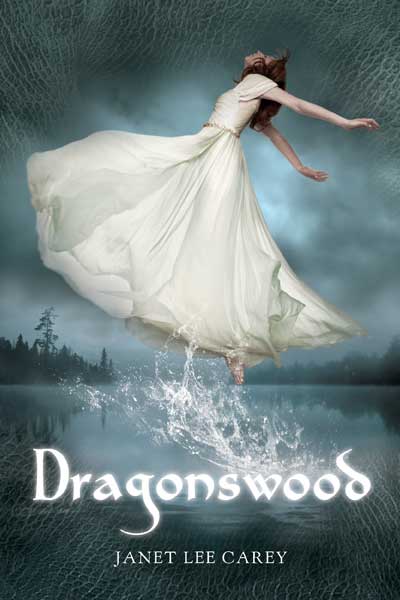 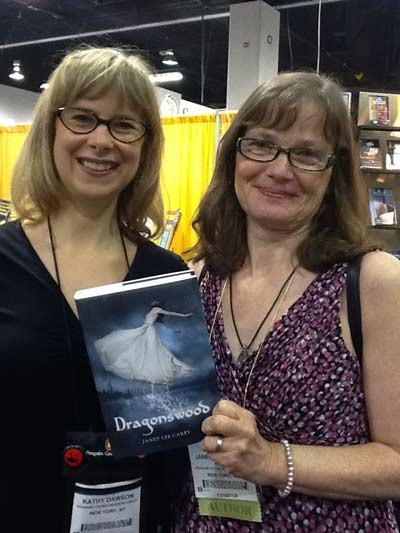 Editor Kathy Dawson and Janet at ALA 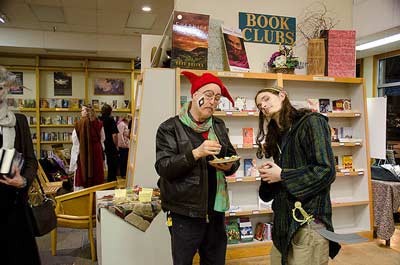 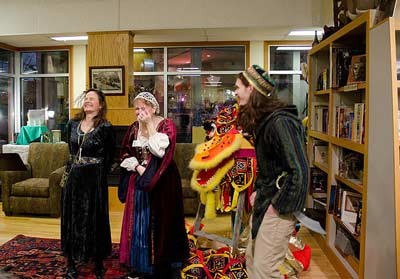 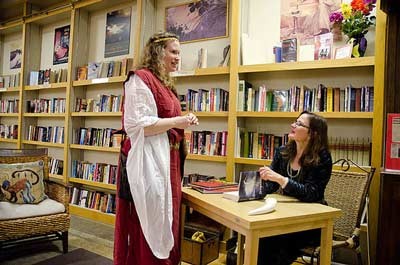 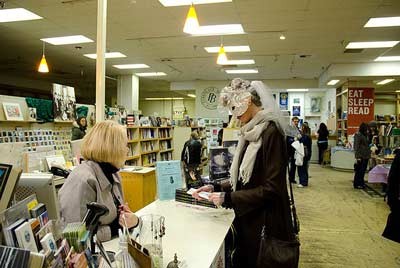 “I see visions in the fire sometimes, images of the past or what is yet to come. The fire-sight does not lie. But I did not see the witch hunter who would ride in to scour our town of sin, so I did not know to run.”

Wilde Island is in an uproar over the recent death of its king. The uneasy pact between dragons, fairies, and humans is fraying and the royal witch hunter begins a vengeful quest to hunt down girls with fire in their hearts and sparks in their soul. Strong-willed Tess, a blacksmith’s daughter from a tiny hamlet near the mysterious Dragonswood, wants more for herself than a husband and a house to keep. But in times like these wanting more can be dangerous.

Accused of witchery, Tess and her two friends are forced to flee the violent witch hunter. The journey is bleaker than they ever imagined and they have no choice but to accept when an enigmatic huntsman offers them shelter in the dangerous Dragonswood. Staying with him poses risks of its own: Tess has no idea how to handle the attraction she feels for him—or the elusive call she hears from the heart of the Dragonswood.

An ALA Best Fiction for Young Adults

I AM SEVEN years old. My father takes me to a witch burning. He runs in close enough to throw sticks in the pyre. The fire roars. The woman, Jane Fine, screams, flames snaking up her gown. Loud cracks of wood or bone. I am crying, choking on the smoke, the burning flesh. Too late Grandfather forces his way in, picks me up, and races back through the mob. I knew Jane Fine. She made pretty candles with flower petals pressed into the sides. They said Jane’s candles blazed with hellfire; that she danced with Satan in Dragonswood. Grandfather holds me close. I weep in his strong arms, bury my head in his cloak. Jane is consumed by fire.

I AM TWELVE years old. I run away, after my father breaks my arm. I creep into Dragonswood, though it is against the law to go there. I have come here before to escape my life, to scale a pine tree and feel the wind. This night I cannot climb; my broken arm is still in a sling. Brilliant shining specks swirl deep in the wood, will-o’-the-wisps fly ahead–tiny fairies, cousins to the ones that are human-sized. I laugh, chasing them. I am filled with a deep longing I have no words for. They dance in magical patterns as I run. In this moment I am free from my raging father, from my mother, who can’t protect either one of us from his anger, from my fettered life in town. I am wild as the fey.

I am laughing. I am crying. The fiery wisps vanish.

I AM SEVENTEEN years old. The sexton is burning a leaf pile in the graveyard. We have come to bury my baby brother, Adam. There are six other graves here, all my baby sisters from years past. My eyes are swollen from crying. I am holding my mother’s hand. I am her only living child. With her other hand, my mother rubs my back. Across the tiny grave my father stands, head down, his first and only son gone to earth. I glare at the midwife whose useless herbs did not save my brother.

Sparks whirl up from the burning leaves. The firelight draws me in. I grow still as still. I cannot feel my mother’s hand. The churchyard fades. All is flame. I know I am being pulled into a fire-sight. I have had visions before. When they come I am transfixed and I cannot look away. In the pulsing blaze I see a man swinging a sword. His body shimmers, green in the flames. I cannot make out his face, all dark shadow in the fire. Light flashes from his sword, cutting bright across my face and chest. I feel the blade’s icy light.

See the Wilde Island map in MAPS AND GAMES

“A dark fantasy illuminated by piercing flashes of hope...Painful, cathartic and cautiously hopeful; a fairy tale for those who have given up on believing in them, but still yearn for happily ever after... END_OF_DOCUMENT_TOKEN_TO_BE_REPLACED

Tess has known little in her 17 years but brutality, grief and fear: the angry fists of her blacksmith father, the infant graves of her siblings and the ominous prophetic visions she sees in flames. As Wilde Island teeters toward political collapse and a vicious witch-hunter sets her sights on Tess, she and her friends flee into Dragonswood, the forbidden abode of dragons and the fey folk. Even as they find refuge with a secretive woodward, the fairies keep calling to Tess… as if they had a duty only she could fulfill. Despite the romantic cover and lush, poetic prose, this is no adventure for the squeamish. Tess does not shy away from graphic descriptions of beatings, torture and grisly violence—and subtler betrayals, manipulation and callous disregard—that leave her scarred in body and soul. Yet for all her mistrust, self-loathing and cringing expectation of blows, Tess reveals a surprising strength and unflinching loyalty. While she does not extend an unrealistic forgiveness, she finds the courage to work with her abusers towards a greater goal; her tentative, hesitant love for the one person who treats her with kindness and respect is both touching and achingly bittersweet.

Painful, cathartic and cautiously hopeful; a fairy tale for those who have given up on believing in them, but still yearn for happily ever after. (Fantasy. 14 & up)

“[A] perfectly crafted combination of history, mythology, and fantasy. The political intrigue, mythology of Merlin, and romances that bloom are all uncovered with precise timing and will have readers racing toward the end and then going back to savor the events more slowly. END_OF_DOCUMENT_TOKEN_TO_BE_REPLACED

Set on Wilde Island a generation after Dragon’s Keep (Harcourt, 2007), this story continues with a perfectly crafted combination of history, mythology, and fantasy. King Pendragon has died, and while the island waits for his eldest son to return from the Crusades, the power-hungry Lord Sackmore is becoming more and more of a threat to the future king. When Lady Adela, the witch hunter, comes to their little town, Tess and her two friends stand accused. Through their wits and the unexpected assistance of a dragon, they escape and flee into Dragonswood, which, although forbidden, is safer than the certain death they face at home. The tenuous peace among the humans, dragons, and fairies on the island is being threatened, and Tess, Poppy, and Meg seem caught in the middle. Tess has been keeping her fire-sight visions secret and it turns out that she is not the only one with secrets to keep. When one of the king’s woodwards takes them in and offers them shelter, Tess cannot deny her feelings for him, even as she fears him and suspects that he has secrets of his own. The political intrigue, mythology of Merlin, and romances that bloom are all uncovered with precise timing and will have readers racing toward the end and then going back to savor the events more slowly. The story is complexly satisfying on its own, but readers will want to go back for Dragon’s Keep as well and will look forward to the future of Wilde Island.

“Humans, fairies, and dragons coexist in the lush setting (first introduced in Dragon’s Keep, 2007), which is so well drawn it practically serves as another character. As Franny Billingsley did in Chime (2011), Carey uses gorgeous, lyrical prose to illustrate a world of authentic period detail combined with fantastical elements. Although the supporting characters, especially the dragons, are well drawn, a first-person point of view keeps the focus squarely on Tess and her journey. END_OF_DOCUMENT_TOKEN_TO_BE_REPLACED

“The Dragonswood is off-limits, but Tess, who sees visions in firelight, is inexorably drawn there. Wrongly accused as witches, she and two friends escape into the forbidden heart of Wilde Island. There, Tess meets an intriguing huntsman named Garth and discovers she is destined to be more than a blacksmith’s daughter. In a nod to Robin Hood, the island’s rightful heir is off fighting in the Crusades, while a regent is doing his best to take over the throne. Humans, fairies, and dragons coexist in the lush setting (first introduced in Dragon’s Keep, 2007), which is so well drawn it practically serves as another character. As Franny Billingsley did in Chime (2011), Carey uses gorgeous, lyrical prose to illustrate a world of authentic period detail combined with fantastical elements. Although the supporting characters, especially the dragons, are well drawn, a first-person point of view keeps the focus squarely on Tess and her journey. This novel, a cross between fantasy and historical fiction, also has a touch of romance and will likely appeal to fans of many genres.”

“Tess plays a critical part in trying to protect Dragonswood and maintain the peaceful coexistence between humans, dragons, and fey folk. This fantasy adventure is extremely fast paced and well-written. Readers will be shocked to discover the true identity of several of the characters and will be surprised by the unsuspecting alliances that they form. END_OF_DOCUMENT_TOKEN_TO_BE_REPLACED

“Young Tess is accused of being a witch and she is tortured in an attempt to get her to confess to her powers. Tess does see visions in the fire, but she is not a witch. In her pain she reveals that she and her friends Meg and Poppy snuck into the dragon's sanctuary known as Dragonswood. Now she and her friends must quickly flee their homes in an effort to escape the irate townsfolk and the evil witch hunter. Their journey is barren, cold, and long. As the group is seeking shelter in a cave, they are discovered by a huntsman named Garth who offers to help them. Tess distrusts Garth but because she and her friends are desperate, she has no option but to accept Garth's assistance. While at the small cabin that Garth provides, Tess has more visions and a strong calling to travel north. She can no longer resist the urge. Will-o-wisps fly Tess towards a castle where she makes some shocking discoveries about her father, herself, and Garth. What's more, Tess plays a critical part in trying to protect Dragonswood and maintain the peaceful coexistence between humans, dragons, and fey folk. This fantasy adventure is extremely fast paced and well-written. Readers will be shocked to discover the true identity of several of the characters and will be surprised by the unsuspecting alliances that they form.”

“Romance-starved “Twilight” fans would do well to check out this beautifully written, thrilling fantasy of humans, fairies and dragons . . . Carey has crafted a vivid fantasy brilliantly set amid the harsh realities of life in the Middle Ages”~

“The reader will not only love Tess for her strong heart and self-sacrificing nature, but they will appreciate the fact that, as a strong female, she doesn’t simply fold up into a ball when life takes an unexpected turn – she deals with it.”

“An amazing and captivating book. It's a gem and I want everyone to experience it!.”

“This book has ruined all other books for me! Nothing I think will top this book in 2012 when it is released!”

“ This was an absolutely stunning book.”

“Dragons. Dark Forests. Fey. Magic . . . I fell in love and never looked back.

« The Beast of Noor—In the Time of Dragon Moon »