Welcome to Library Lions Roar. Author JoAnne Wetzel is here to give a special Author’s Roar for Libraries, and to share her books and school visits with us. Take it away JoAnne! 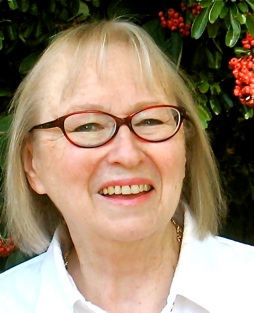 I went to nine schools by fifth grade, because my father was in the Air Force and we moved a lot. So far I’ve lived in eleven states (NY, SC, PA, AZ, WA, VA, NJ, AR, CT, DE, CA) and the Greek isle of Crete. Where ever we moved, I always found my old friends in the library.

I saw my first Broadway play, Peter Pan, when I was 7. The actors flew!  I’ve been a theater fan ever since and vowed to see a production of every one of Shakespeare’s 37 plays in my college textbook of the Complete Works. So far I’ve seen 39, including Cardenio and Edward III. Two of my books are about children’s theater.

Author’s Roar: Funding for libraries, especially school libraries, is currently under threat. As an author, what are your thoughts about that?

I’m going to speak as a retired children’s librarian. Fifteen years ago, I was hired by the Redwood City Public Library to begin a program sending volunteers to read to children who couldn’t come to story times at the library because they were in day care. So far, the Traveling Storytime volunteers have made over 250,000 child visits. A few of the children they read to had never held a book before the volunteer began reading and were not aware it could open. The preliteracy skills of all the children being served by the library have soared. Libraries are vital to our children, our country and our culture. The long lasting results of the services they provide to their communities are worth many times over the funding they receive.

For those children who can come to the Redwood City Library, the Children’s Room is a delightful place. The four amazing columns: numbers, alphabet, colors and motions, were painted by Gianna Marino. 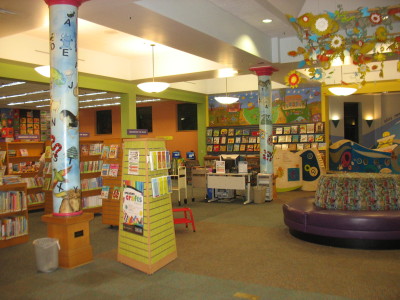 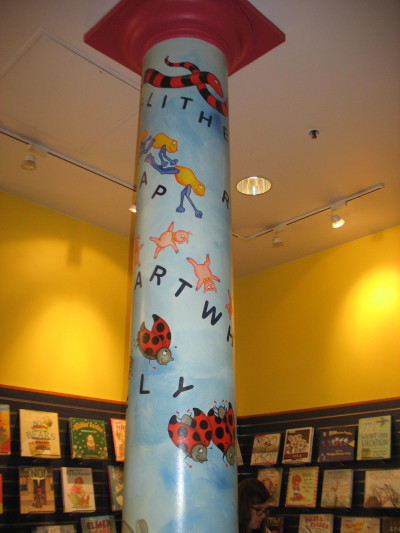 (Close up of motion column)

A Lion’s Pride of Programs
I’ve spoken to over 7,000 children at schools and libraries in the San Francisco Bay Area. My most recent school library visit was arranged by Lisa Fagan Brown, the elementary school librarian at the Lincoln Community School in Accra, Ghana. My two grandsons attended it when their parents were working at the American Embassy there. I spoke to the second and third grade classes about my children’s picture book, THE CHRISTMAS BOX 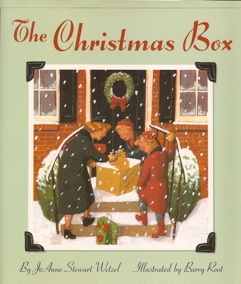 My nine-year-old grandson helped me with the puppet show of “How the Whale Got his Throat,” the play featured in my photo essay, ONSTAGE/BACKSTAGE. 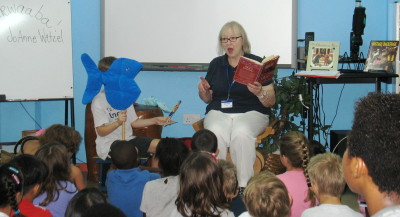 (Photo of puppet show in Ghana.  The word on the white board is Akwaaba, which means welcome in Twi.)

Since my middle grade, PLAYING JULIET, starts “There’s a play by William Shakespeare that’s so unlucky no actor will say the title out loud. They call it the Scottish play if they have to refer to it at all…”  I spoke to the 6th grade drama class on theater superstitions and Shakespeare. We had a lot of fun with it. The talk was in their small theater. When one of the girls realized the name of the Scottish play, I confirmed it started with an “M’ and her teacher warned her not to say it to anyone until she was outside.

What matters most to me is that people read my stories and every time an author speaks at a library, their books fly off the shelves. 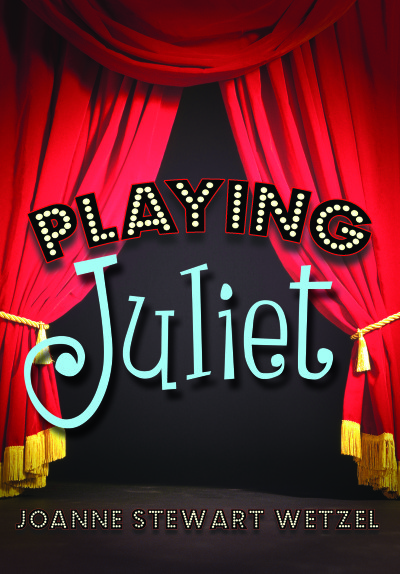 Whenever we moved, my dad looked for a house near the library.  I still remember the blow fish in the display case on the second floor landing at the Greenville, SC library; the modern interior in Phoenix, AZ that was so cool after the scorching heat outside; the Library Lions I saw in Manhattan; the Base Library at Iraklion Air Station where I discovered adult mysteries.

One year my father was sent to Japan and we couldn’t go with him. My picture book, THE CHRISTMAS BOX, tells how we managed to be with each other at Christmas even though we were thousands of miles apart. 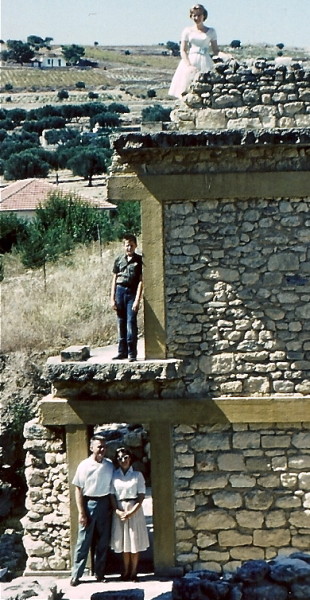 More Library Love
I wrote my first book with Caryn Huberman Yacowitz (whose latest book is the hilarious I Know an Old Lady Who Swallowed a Dreidel). We planned to write a photo essay about the Palo Alto Children’s Theatre, but we were so new to publishing, we thought we had to provide the photos. We’d taken sample photos of a play at the theatre, but didn’t have a single photo credit to pad our proposal to publishers. So we went to the Palo Alto Children’s Library and asked if we could mount an exhibition of our theater photos there. We could, we did. Carolrhoda published the book as ONSTAGE/BACKSTAGE and the library has asked us to speak many times over the years. 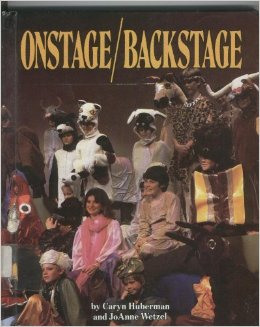 Roar For Librarians
Jan Pedden, a Children’s Librarian in Redwood City is an expert at developing early literacy programs. She’s now in charge of the Traveling Storytime and does such a wonderful job in supporting and recognizing the volunteers. 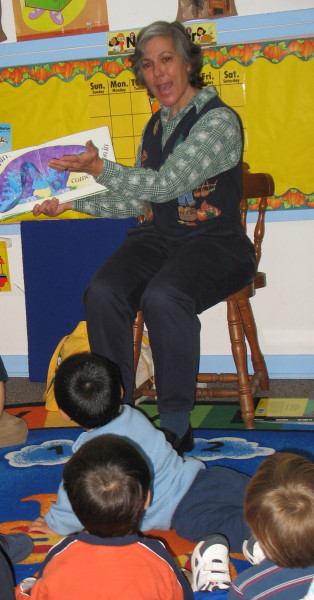 The picture below is of “Teacher Jeannie,” one of a number of volunteers who have been reading once a week for 15 years.

One Last Roar!
April 23rd is the date Shakespeare was born and the date he died. Celebrate his life, and the 400th anniversary of his death, on his birthday, April 23rd, 2016. 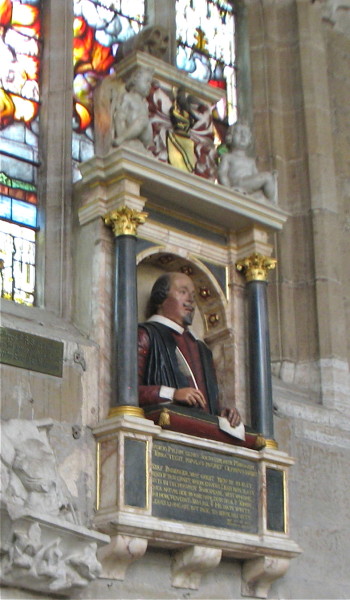 Thank you Joanne for the terrific Roar!

Note to Librarians: If you’re a Youth Librarian working in a school or public library we’d love to hear about you and your library. Email Janet via the Contact page on this website to set up an interview.