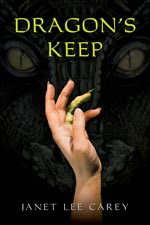 Let it be known that we had a blast at the Dragon’s Keep book launch party. The revels lasted into the night.

All were terrified when the dragon swooped in and fought valiant Kye Godrick. But the village folk cheered when the Riddle Master saved Kye by challenging the dragon to a contest (dragons are suckers for riddles). Let it be known that the villagers bested the dragon with brilliant answers to puzzling riddles. Prizes were won, fortunes were told, and there was dancing, and much feasting, and yes a reading from Dragon’s Keep.

Let it also be known across all kingdoms that Dragon’s Keep has received two starred reviews, is listed on amazons top 100 new books for teens and is on the nomination list for ALA best books for teens. The villagers all cheered. “Hooray!!”

Here are the party photos Heidi Pettit took for your viewing pleasure.

Hats off to Parkplace Books in Kirkland for hosting the party. Sweet thanks to the divine Diviners (my loyal critique group) for all their help. A kiss to Sarah Bond and her amazing Living Illustrations Troupe for bringing the Dragon’s Keep characters to life.

And a good time was had by all!

Until the next blog, be well,