Dreamwalkers, you’ve walked in on another Creative Conversation. You’re welcome to eavesdrop then comment below adding your thoughts to the conversation about Art and Survival. Today I’m talking with artist Gretchen Hansen 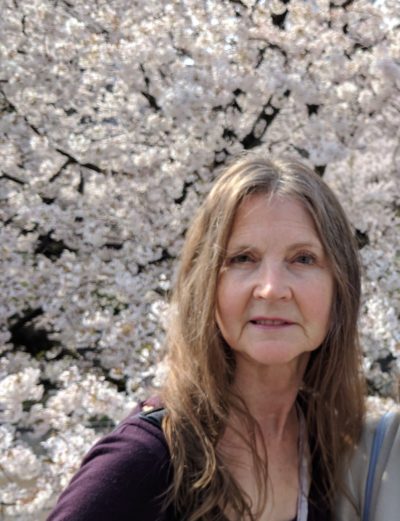 Janet: Hi, Gretchen. I can’t draw worth beans, so I’m fascinated to hear more about the creative process from a visual artist’s perspective. Before we dip into your chosen topic, can you tell us a bit about your art and what you love about it?

Gretchen: As I may just be a novice, the two things I enjoy most about art are my vision and my materials, in either order.

Janet: Writers can go nuts over paper, pens, and pencils (I have to use mechanical pencils #7 led), but our materials are nothing like those of visual artists. Vision is also a part of the writing process, but tell me more what these things mean to you.

Gretchen: By vision, I mean that I am grateful for the way in which I see things. I especially have and continue to enjoy watching children in their play spaces. And the way in which light and shadow play upon their features. This kind of visual information informs the inner vision of what I’d like to recreate on paper or canvas, or cloth, in some fashion.

Janet: I can see what you mean by the watching children at play. I’d like to take one picture and ask a bit more about it. I’ll choose The Rice Flower Girls painting where they are lighting a lantern. 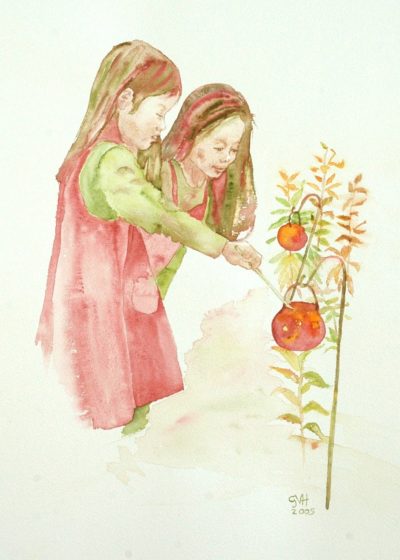 Can you tell us more about what inspired that, Gretchen?

Gretchen: Oh, thank you, Janet, for choosing the two girls Lighting the Lanterns. When I began experimenting with watercolor, I used my two nieces for models. Sometimes my sister would “loan” the girls to me for the weekend or a holiday. When Halloween was approaching, I gave them chopsticks with matches taped on, so they could light little candles in some copper-like jack-o’-lanterns in the front garden. As it was dusk, I took some quick snapshots of them having fun with a forbidden material: fire. I liked their caution, and their respect and how carefully they avoided each other. I like the soft glow from the jack-o’-lanterns warming their faces when it had just begun to be a very chilly October. This watercolor, made from several sketches and watercolor trials, pretty much distils the wonder of sharing in a primal task, using fire to make light. It also highlights my joy in using drops of watercolor pigment dropped into water spread on my favorite paper: Fabriano, which has a light texture which allows for some play. The color may move from where I set it sometimes, creating an unusual surprise such as the rose madder genuine to bleed into the water, creating its own soft edge, as hoped.

Janet: You caught the girls’ respect for fire in their expressions. Your description reminds me of the way poets use language to distil a fleeting moment.

You said you wanted to look at Art and Survival today. Listening to you talk about a single painting gives me a sense of how central creating art is for you. Perhaps it touches something primal?

Gretchen: A poet uses language carefully to touch upon a fleeting moment, it is the same for me. 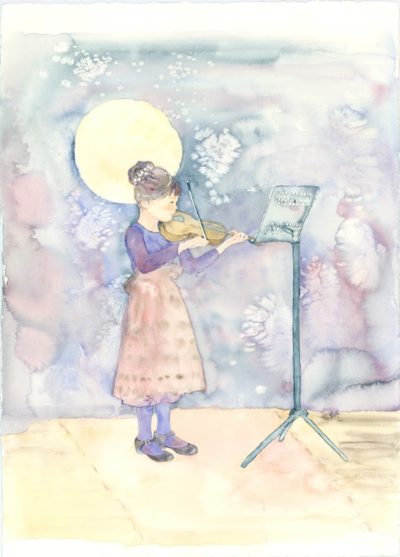 I feel compelled to capture these ephemeral moments before they fade. While I cannot paint every moment I am privileged to see, I want to try to capture the ones that feel most significant, in terms of gesture, light or some magical quality I am not yet able to define, until perhaps later.

Survival comes into the picture because just as I quit teaching in the high school to pursue watercolor, my husband developed throat cancer and we developed strategies for surviving the harsh treatments of radiation, multiple surgeries, continual appointments and the more pleasant treatment of hyperbaric oxygen. I needed to devise liquid protein smoothies for his new diet, and I also needed to find a way to discover some spaces of time where I could draw while waiting, lots of waiting in clinic and hospital rooms. So my own mental and emotional survival began back then too. And art was the primary means of feeling that part of my self, the internal self that could still carry on it spite of anxiety and fears. That, and playing with the nieces, then the grandchildren whenever possible.

Janet: Gretchen, if you read last month’s Dreamwalks Earth Day post, you’ll see how my art helped me through a tough time. In the post, I shared a scene I wrote in the hospital when our son was having surgery. Doing art helps me navigate through dark times. While writing, I find solace, structure, and a quiet place to be myself–much as you described while painting. Perhaps watching children at play and noticing the play of light, helped to light your way back then. That’s Art and Survival indeed.

Gretchen: Yes, when you wrote about the boy Miles witnessing a mighty tree’s fall in the forest, while your son was undergoing serious surgery, that is exactly how some of us can re-process our fears, or show our ability to continue in spite of great pain. Last week, I was privileged to walk in the forest at the Meiji Shrine, just on the outskirts of Tokyo. It was a kind of shinrinyoku, forest-bathing for the persons walking through. It was enlightening to see one birdwatcher, armed with camera and oculars, simply standing and observing without using his tools while one very friendly bird flitted back and forth across the forest path, obviously wanting to be close to him. It was a good place to breathe! This trip was a gift from my daughter’s family to me. Maybe because even though I physically survived the years of my husband’s decline, I must have needed to experience the land where I was first inspired to draw and paint in order to continue to survive, mentally and emotionally, now that he has passed on.

Janet: How kind of them to send you on this trip to Japan after your great loss. I can hear the reconnection to the land where you were first inspired to draw ~ It was a good place to breathe! Did you photograph the birder?

Gretchen: I did take a photo of the birder listening and watching quietly, although I did not have time to catch the quick little bird by sketch or photograph! That will have to remain a subject for my memory to bring back.

Janet: When you capture such a moment, do you already sense what medium you want to use? I ask that because your site has paintings, and works in cloth. 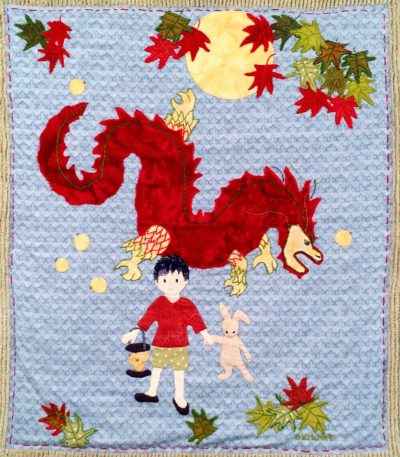 Gretchen: While I don’t really know how which sense chooses a medium, I know when it occurs. For example, everything I did for years was watercolor until a student, and his wife who are close to our family let us know they were expecting a baby. Because they were far away, my son went to visit them and tried to take a photo for me of the fireflies in the evenings around their home. At that time I scribbled a little ink sketch on a brochure from SCBWI. Then I decided I wanted to imagine the child as an active three-year-old, so I sketched a larger version to use as a pattern for applique and embroidery so that I could make a futon for the coming baby. As I worked on the various red and green fabrics that I stitched onto a watery blue sky and cloud-like fabric, a story also emerged: I imagined the boy setting off to gather fireflies, simply so he could observe a few in the firefly lantern (I had already mailed a firefly lantern to the parents, a one-time offer from Hearthsong Catalogue). He set off with his stuffed dragon toy for company. When I finally finished the quilt, the little boy was already nine months old and learning to climb stairs! By then I had started sketching with one of my favorite pencils, Derwent Watercolor sepia. I really liked the warm golden and brown tones achieved when I swiped a bit of water over the sketches. 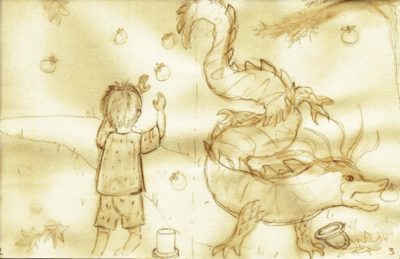 My husband was still going through some surgeries to try to heal an overly radiated clavicle bone that showed radio osteonecrosis. I was not feeling light or carefree, but very responsible and serious. So, I ended up experimenting with acrylic gouache, a rather heavy and sticky paint. I decided to paint some of the colors of the futon, notably the late summer colors of greens and reds on black gessoed canvas to evoke the quiet night adventure the boy experiences in the park near his home. 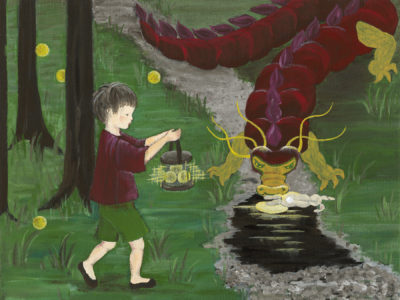 Janet: I begin to see how experimentation with different materials is as important for visual artists as writing different kinds of stories is for authors. One part of Art and Survival is allowing ourselves to play with new forms that inspire us. Every new book presents its own challenges. For me, that exciting/terrifying new beginning is part of what makes it fresh and keeps the art alive.

Gretchen: Your comment about how one keeps the writing fresh, alive and inspired by challenging oneself reverberates with me, Janet. I did not think I could handle such sticky, quick-drying paint after having luxuriated in the swirl and spread of watercolor. But I did come up with, I hope, evocative paintings of a quiet pre-bedtime walk through the park, with a friend in tow. 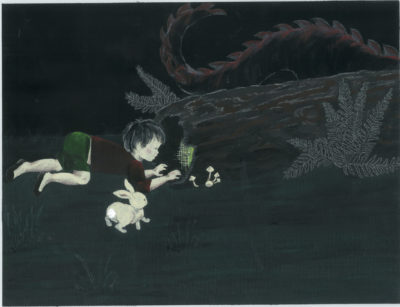 Janet: Thanks so much Gretchen for sharing these art moments with us. I hope you keep working and playing. Our mediums differ, but we are makers.

Gretchen: I thank you, Janet, for your interest, and teaching me how to use yet another new medium to visit others: Shared Google documents for an interview is really novel to me!