Today we’re going on an amazing Dreamwalk with award-winning children’s author Lee Wardlaw who journeyed 500 miles to Paradise, CA to deliver books to the school children who lost their homes and schools in the devastating 2018 fire. 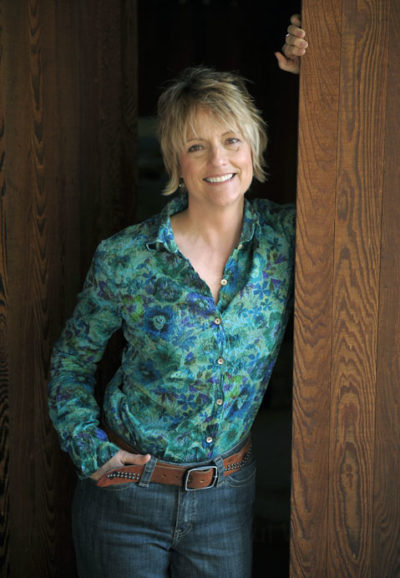 Janet: What first gave you the idea to bring books to Paradise?

Lee: Living in southern California, I am no stranger to fire. We joke that Santa Barbara has four seasons: Drought, Fire, Flood, and Earthquake. My family evacuated for the first time when I was 8. While a senior in college, the house where I grew up was one of 200 destroyed in a wildfire. (That disaster inspired my first young adult novel, COREY’S FIRE.) Over the years, there have been other blazes, other evacuations, most recently in December of 2017, when the Thomas Fire raged through 282,000 acres in our area, wiping out 2,000 homes.

The Camp Fire in Paradise, CA was far worse. 14,000 homes were destroyed. 8 of the town’s 9 schools were flame-razed or deemed unusable due to smoke-damage. People literally ran through hell for their lives. 83 didn’t make it. After the smoke cleared, only 10% of the town’s buildings had survived. 100% of the school district’s student population was considered homeless.

My heart went out to those kids. I knew, first-hand, what they were feeling. And I knew how important it was for them to find solace and safety in a book; to be able to escape the tragic chaos they’d endured by spending time in favorite stories with familiar ‘friends.’ They needed a literary oasis – and they didn’t have it, because their libraries were gone… 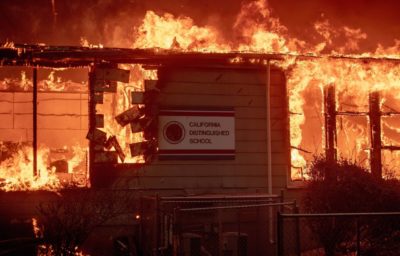 I sent a few dozen emails to writer and illustrator friends, asking if they’d donate an autographed copy or two of their latest title(s) to help rebuild the Paradise libraries. I also used Facebook and Twitter to send out requests. Many, many authors were kind enough to share and retweet my posts. I expected, maybe, 200 books. After all, we get hit up frequently for freebies, and we simply can’t afford to say ‘yes’ to every charity, school, or organization that asks. So, imagine my shock when my request went viral – and led to more than 5,230 books. (All piled in castle-like turrets in my living room! )

Janet: Wow! How did you gather all those books?

Lee: Most authors and illustrators sent their titles via media mail, since that’s the least expensive way to ship. (My letter carrier would stagger down the walkway to our front door, balancing a tower of boxes, saying with a grin: “Look at the muscles I’m developing, carrying all these books!” I also received daily deliveries from Fed-Ex and U.P.S. And, sometimes late at night, stealthy Fairy Bookmothers would leave anonymous bags and boxes of books on my doorstep…

I think I would’ve received even MORE books if I had started the book drive AFTER the Thanksgiving and December holidays. People got busy and forgot – or snowed in. And some couldn’t face the long lines at the post office. As the books arrived, I kept records of everything: book titles and their value; whether they were hardcover or soft, fiction, non-fiction or poetry; who sent them and when. I organized all the donations by grade level (Pre-K; Lower Elementary; Upper Elementary; Middle School; High School), then packed them in former wine boxes (donated by the winery my husband and I used to own) for shipping. 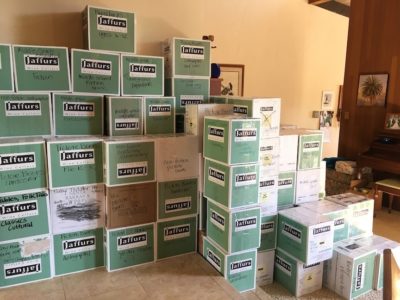 I chose three main schools to be the recipients: Paradise Elementary, which had been reduced to ash; Paradise Intermediate, which is now holding classes in an old hardware store; and Paradise Children’s Community Charter School. The latter never had a library; instead, each classroom had a private library of books chosen and paid for by individual teachers. Without insurance, they couldn’t replace those titles, so donating to them was priority.

Originally, I planned to ship the books. But as more and more arrived, I realized I’d need to haul them myself the 500 miles to Paradise. A vineyard owner offered his flatbed trailer, and my husband, Craig, attached it to our truck. Friends volunteered to load the 140 boxes of books for us since we both have backs allergic to heavy lifting. (Each box weighed between 30-50 pounds.) I calculated we toted 1.5 tons of books. 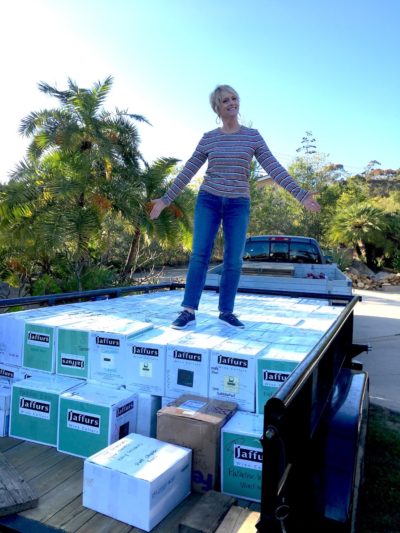 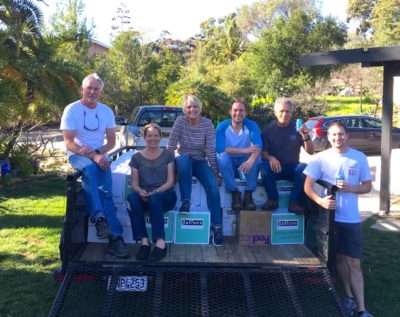 Janet: That’s amazing, Lee. Would you share some of the trip highlights?

Lee: Getting a flat tire on the trailer, Saturday after 5:00 p.m. – 4 hours from home, 20 miles to the nearest town – was definitely a highlight! 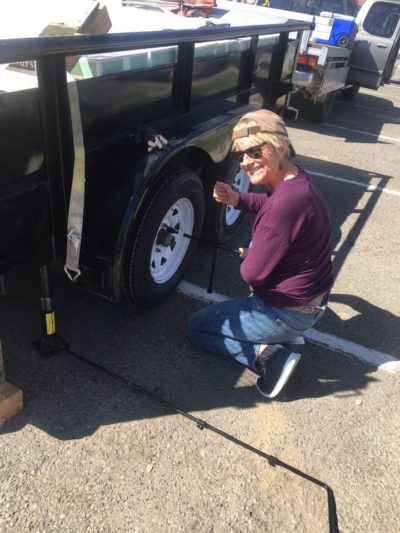 Fortunately, we managed to find the one and only tire store that was open on Sundays. Oh, and having a mouse zoom at me while I was sitting on one motel commode (causing me to actually squeak: “Eek! A mouse!” just like in the cartoons) was another high point. 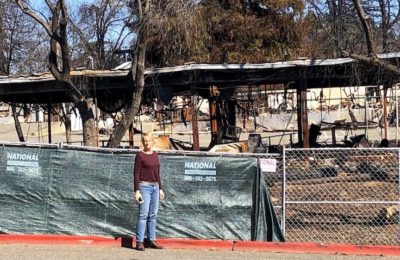 (Lee at former Paradise Elementary four months after the fire) 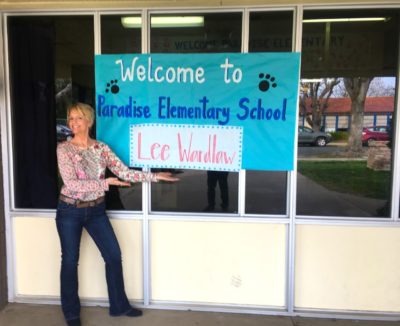 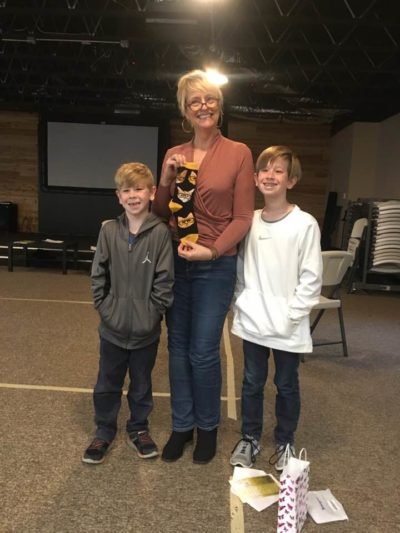 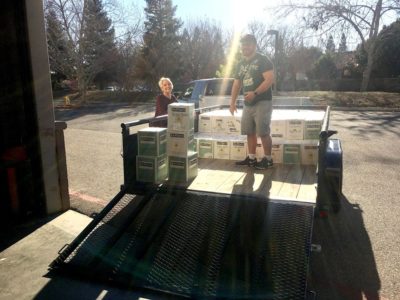 At each, I shared my own fiery experiences and the roller coaster of emotions I and my family had ridden. I talked to them about how I turned a disaster into something positive by writing a novel based on our fire – and how that fire was the spark that ignited my career as a children’s book author. 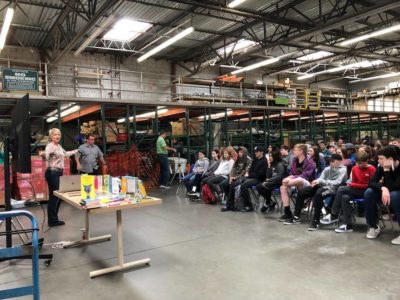 School Assembly at the temporary site of Paradise Intermediate. (An old OSH store. First time I ever gave a presentation in a warehouse!)

As part of my PowerPoint presentation, I showed pictures of my house before, during, and after ‘my’ fire. Each time, the room fell eerily silent. Then hands would shoot up, with staff and students asking question after question about how I had handled the disaster and its aftermath, and what did I recommend THEY do to deal with the enduring trauma. Immediately after each session, kids clotted around me, offering hugs and sharing stories about lost homes, lost pets, and almost-lost family members. It was heartbreaking – and necessary. 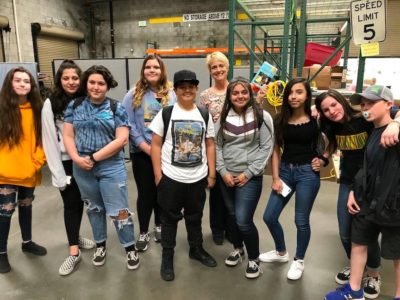 The schools in Paradise still need books but can’t accept more donations until September of the 2919-2020 school year. If you would like to donate an autographed book then, please contact Lee on her website contact page to get onto the donor list. Lee will let everyone know when the schools have settled into more permanent, temporary sites, and are ready to receive books for their libraries. 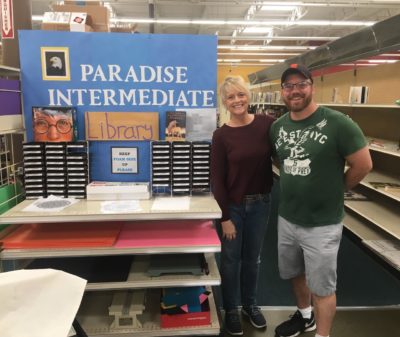 Janet: Thank you for all you did to provide Paradise children the solace and empowerment they need through stories, Lee. And for sharing this amazing journey with us.

More About Lee
Lee Wardlaw swears that her first word was ‘kitty’. Since then, she’s shared her life with 30 cats (not all at the same time!) and published 30 books for children and young adults, selling more than a million copies world-wide. Lee’s books have garnered numerous awards and honors from the ALA, IRA, NCTE, CBC, and more. Her most recent books include: 101 WAYS TO BUG YOUR FRIENDS AND ENEMIES (fiction, ages 10-14, Puffin/Penguin); WON TON – A CAT TALE TOLD IN HAIKU (illustrated by Eugene Yelchin, Holt/Macmillan), recipient of the Lee Bennet Hopkins Children’s Poetry Award; and WON TON’S companion book WON TON AND CHOPSTICK, winner of the BookSource Poetry Award. Lee lives in foothills of Santa Barbara with her husband and one dog-disdaining cat.