Welcome to Creative Conversations, discussions on the creative process. Come eavesdrop in on my conversation with beloved author Bonny Becker 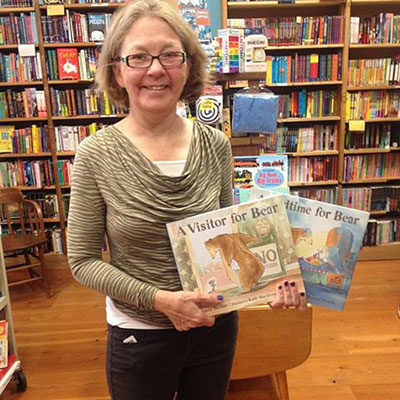 Bonny is the author of many books for children. Our grandson, Xander, is especially fond of her Mouse and Bear books!
Some BB Books: 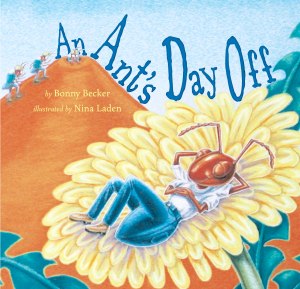 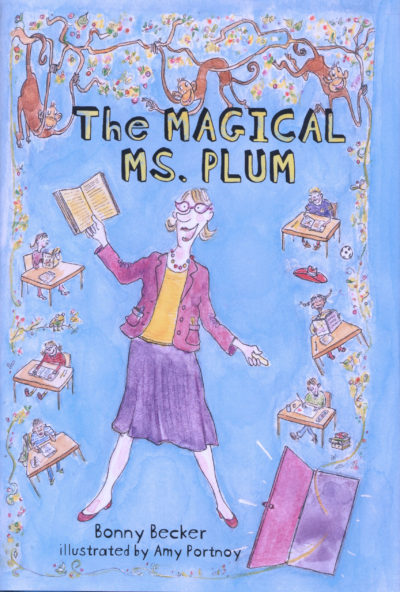 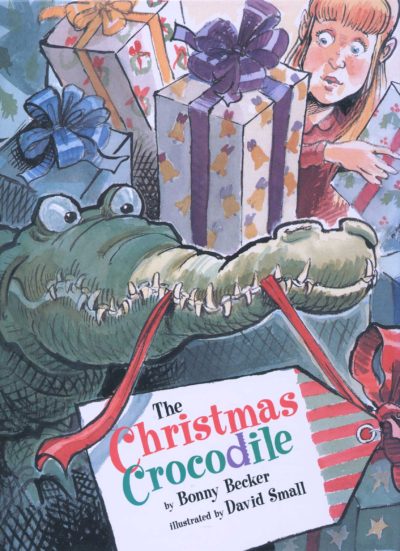 Bonny’s offering some lucky Dreamwalker the chance to win a signed copy of one of her books. See Giveaway below. Thanks for the generous offer, Bonny. Good to snag some time to talk with you. I’m here with my sparkling water (we’ll see if my wit is sparkling) and ready to start when you are.

Bonny: Hi Janet, I am here with my de-cafe latte, which is something I have way too many times during the day. It’s great to get a chance to talk.

Janet: You said you’d like to talk about how each one of us is a creative being.

Bonny: Yes, that is an idea I believe in strongly. Someone once said to me that if you look at the world, at the universe, it’s so clear that God–or whatever force you want to put in here–is creative. That this is clearly a primary attribute of the universe. Creativity.

And we are part and parcel of that and have the wonderful, amazing privilege to be creative ourselves. Look around the room you are in right now and consider what it took, the endless creativity that went into every thing in the room. From the thousands of years that turned into that rug on the floor to the science that went into the paint on the walls to the manufacturing that created that computer screen in front of you! It’s breathtaking.

Janet: That kind of awareness of the connectivity between all things helps me to dip into living energy when I create a story. One cool practice I learned to do is to consider how many hands went into making the meal in front of me. From farmer, farm worker, truck driver, store personnel, to my kitchen to my table. So many hundreds of people helped to make the small salad I’m about to eat.

Bonny: So true. And even though a lot of jobs feel pretty mundane, they came out of and were perfected by the inherent creativity of the people involved. And, if there’s room and time in someone’s life, anyone can bring creativity to either their mundane daily job or find an outlet that’s outside of that job.

I love this quote by the dancer Martha Graham: “There is a vitality, a life force, an energy, a quickening, that is translated through you into action, and because there is only one of you in all of time, this expression is unique. And if you block it, it will never exist through any other medium and it will be lost. It is not your business to determine how good it is, nor how valuable, nor how it compares with other expressions. It is your business to keep it yours, clearly and directly, to keep the channel open.”—Martha Graham (1894–1991), American modern dancer/choreographer

Janet: I have never seen this quote. She touches on something I reach for in story — knowing each one of my characters has a unique place in the world, a unique voice and reason to be right here, right now.

Bonny: Oh, I like that thought, Janet. I think Martha hits on four really big points when it comes to the creative life in her quote:  #1 We all have a natural vitality, energy, force, that wants to express itself–I call that creativity. #2 It will be unique just by virtue of coming from you. #3 Don’t get overly critical of yourself. Just do the work. #4 You have an obligation to stay open to that force inside of you.

Janet: When I get kinked up its usually # 3, being over critical. When I get back in flow, I’m not thinking of myself. I’m just doing the work. The best way is to make art and get out of the way.

Brene’ Brown has a cool practice. You write your own permission slip, for example; “Permission to create without judgments”, or “Permission to play!” Slip the slip into your pocket and proceed. Can you talk a little about how we can pass this permission to be creative on to children?

Bonny: I think they have this naturally and then it gets trained out of them. And maybe there’s no way around some of that–there are rules and standards ultimately to any art. But I think we can start by getting out of their way–the children’s way, I mean. Let them make a mess. Try to hold back on the correcting. Offer ideas very lightly. 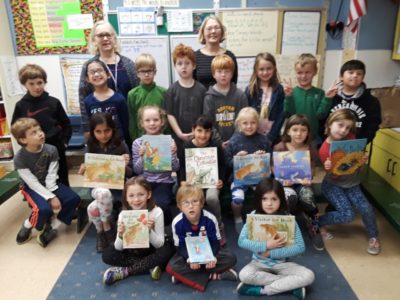 The way reading and writing is handled in schools these days makes me a little sad. Reading, for so many kids, has been turned into a chore. There’s a lot of creative writing done in schools now, which is great. But I don’t think most kids are very skilled writers when it comes to craft, so I wouldn’t really be trying to teach them that much about story structure in the beginning. Instead, I tell kids who say they want to be a writer to read whatever they want and to just have fun with writing. They can’t quite do that in school, but at home, if they want to write a 10 page story that is mostly about what gowns the princess wore, just let them alone to do it. 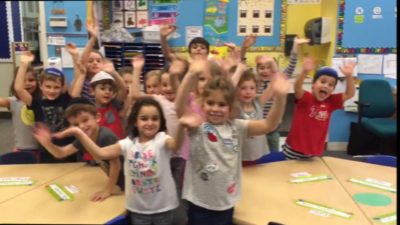 We’ve sort of created this idea that everything has to be productive, everything has to lead someplace, to add up. And it just doesn’t. Your child can write a bunch of poems and never grow up to be a poet. Don’t start pushing them in that direction, just let it grow.

Janet: I’d love to hear an example of how one of your stories “grew” Bonny.

Bonny: Sure. Almost all my stories, including very short picture books, take quite a while. It usually takes at least a year, and often much more, before I feel a manuscript is ready. For me, Time is an essential part of the creative process and the way a story grows. The best ideas–the unexpected plot turn, just the right name for that character, the right way to phrase something, that great detail–pop up over time. I don’t know why. I won’t necessarily even be that consciously thinking about the story but then it will come to me. Days, months, years down the road. Respect the way your own subconscious works. 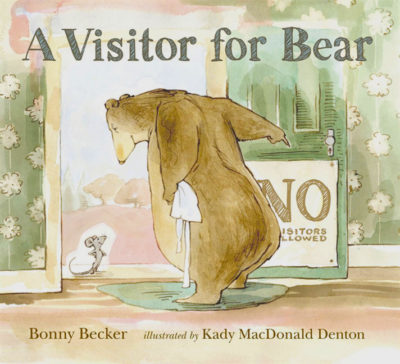 For example, in my best-known book, A Visitor for Bear, the idea of a mouse who won’t go away, just popped into my head one day. I began to consciously work on it. Who would the mouse bother? How would the story structure itself? What would their names be? The names part turned out to be amazingly easy. Mouse and Bear, of course. 🙂 But it was a creative choice. I didn’t want to individualize them. I wanted them to be slightly mythic, I think.

At any rate, I worked on the book for about a year, I think. Working on it. Setting it aside. Showing it to a group. Getting feedback. Setting it aside. And it was pretty polished, but the one thing I hadn’t quite nailed down is what I call the “turn.” The moment that story direction changes and your character changes. For the longest time, I had Bear reject Mouse and reject Mouse, finally get worn down, serve him tea and realize that it was nice to have a friend. It wasn’t until way late in the process that I realized that this wasn’t a satisfying turn. And it came to me to have Mouse appreciate Bear.

Mouse admired Bear’s fire, Mouse admired Bear standing on his head, Mouse laughed at Bear’s jokes. That became the turn. And the essence of it didn’t come really until the story was essentially complete. So a long way to go to say–give your stories the time they deserve!

Janet: I love hearing the pre-story background and about the “turn,” which I call “the turning point” being more long-winded than you are.

Bonny: I don’t know. I gave a pretty long-winded answer. 😉

Janet: Ha! So, Bonny, how can we stimulate their creative process? How to call up that “force” that Martha talks about?

Bonny: Well, it’s actually pretty straightforward. But not being long-winded at all, I’ll give a little background first. Namely that science now knows that when we are tapping into our subconscious and being most creative, our brain is usually in one of two states. It’s either generating Alpha Waves or Theta Waves. Alpha Waves are when our mind is a relaxed open state. And Theta Waves are a deeper, almost twilight state–like right before you fall asleep.

Science also knows that your brainwaves will do something called entrainment. Your brain waves will tend to match the rhythm around them. So to get into an alpha state, all you have to do is go walking or listen to music or drive along in a car with your mind half on the road and half just musing.

The key word is “musing.” You’re doing something automatic that doesn’t require much of your conscious mind and you’re letting your mind wander. That’s the easiest way for ideas to come to you. Jane Yolen has a shorthand for it. She calls it “bed, bath or bus.” She says these types of activities are creative times for her.

Janet: I have some ways to get into that kind of flow. I meditate, story journal and daydream in the mornings. Once I’m in my office, I put on the sound of waves crashing and dance before I write. I’m writing a fantasy that includes sea people just now, so waves get me into that deeper state. Freewriting. Movement. Stillness. Breathing. All of it helps me to “hear” the story better, see the scenes in my head and go there.

Bonny: That reminds me of a lovely quote by Emily Dickinson. “Not knowing when dawn will come, I open every door.”

Janet: That makes me want to open every door, Bonny. 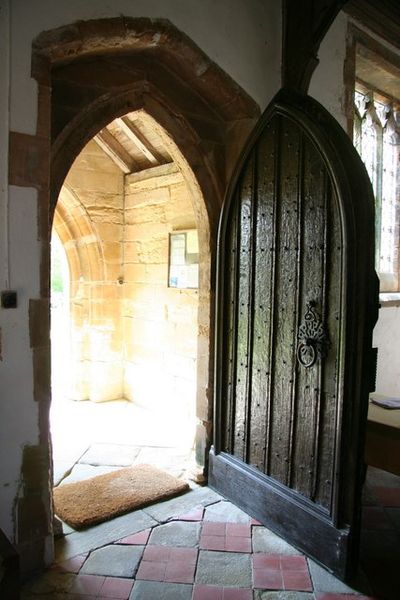 Bonny: Thanks, Janet! I love talking about this stuff. Thanks for letting me join in and for sharing your experiences.

And now the book giveaway. Enter below for a chance to win a signed copy of either, Cloud Country or The Sniffles for Bear. 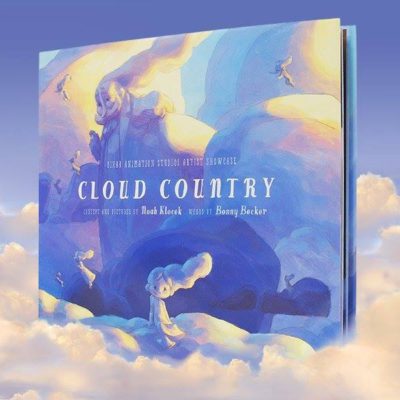 Cloud Country
Sitting there, among the clouds, looking down and daydreaming is… a little cloudlet. Gale would like nothing more than to make one real cloud shape. But instead, she creates something different. 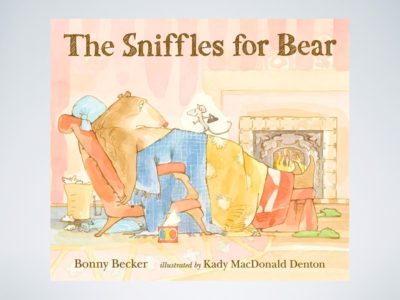 How to Enter. To those of you who are new to Rafflecopter, all you need to do is Log In using the “Facebook” or the “Use Your Email” button below. Just type your first name and enter. That’s it. But if you want more chances to win, you can also tweet. (The tweet is written for you ahead of time. You just need to click. Also, you need to click “I Tweeted” to confirm the entry). Good Luck All!

2 comments on “Musing with Bonny Becker”