Welcome to Creative Conversations. Today author Helen Landalf and I are meeting up to share our Reflections on Revision. Let’s dig into the process and see how writing style reflects lifestyle choices as we revise our work. 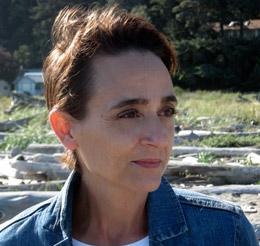 Janet: Hi Helen. After reading some of your interesting blog posts on revision, I thought it would be interesting to delve into this process with you. Your post Revise Yourself!  begins, “Every time I revise for an agent or editor, I learn something about myself as a writer.” Can you talk a little more about that?

Helen: Hi Janet. I’ve really been looking forward to this conversation with you! Yes, I do feel that when I tackle an agent or editor’s suggestions for reworking my manuscript, I learn a lot about myself as a writer. A good example of this is when the editor of my YA novel FLYAWAY asked me to insert new scenes into the book in order to flesh it out. As I struggled to expand the novel, I realized that I tend to write very terse and include only the bare minimum of setting, dialogue, etc. I’m always working to change that. 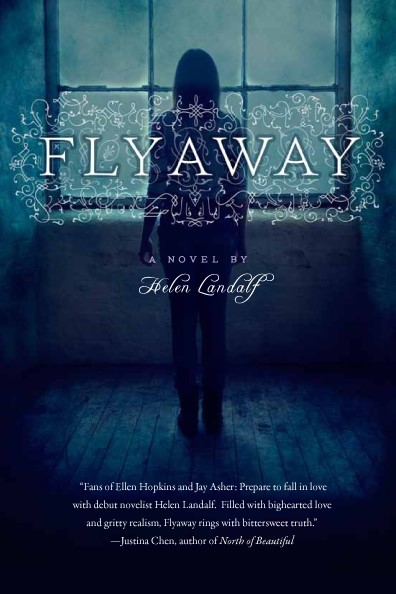 Janet: I bet that means you don’t have any difficulty with pace. Is that so?

Helen: Well, that’s true if you like your pace fast. The difficulty I have is that I tend to rush events in the book, so the pacing ends up being off. I think I’m worried that I’ll bore readers if I go on too long.

Janet: One of the reasons I wanted to talk with you is because I have the opposite problem. I tend to write too long. Most of the editorial letters over the years have been about cutting and trimming (I sometimes need to trim hundreds of pages out!) The challenges of cutting can put me into a funk until I begin working and honing. I’m relieved when I’m able to trim and make the story clearer. My problem with pace tends to be that I need to tighten and make it faster.

Helen: That’s hilarious. I have never, ever had to trim something from a manuscript. Agents and editors are always trying to coax more out of me and get me to up the word count. FLYAWAY was only 47,000 words – and that was after my agent made me add characters and my editor made me add scenes! On the reverse side, I love trimming. I’ve done some writing for magazines, where you have to stick to a specific word count. I find it fun and satisfying to see how many words I can cut and still retain the sense of the piece. I once won an award for a 200-word flash fiction story. Strange that I write novels, I guess.

Janet: I think we have a Jack Sprat situation here! 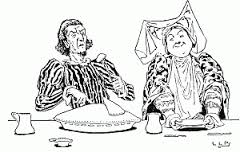 You mention an editor asking you to add a character? I’m asked to cut them. And twice now I’ve also changed novels from two viewpoints to one. The latest example is IN THE TIME OF DRAGON MOON. 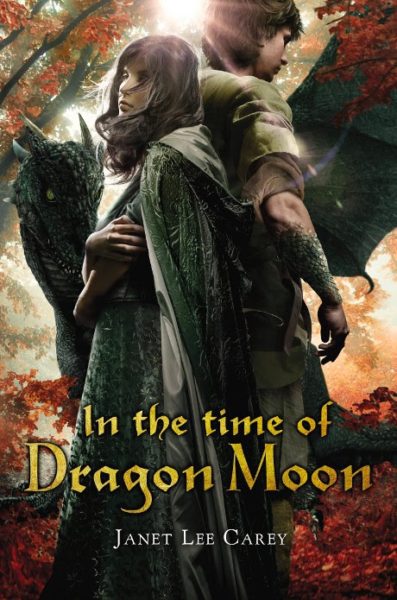 Earlier drafts switched back and forth between Jackrun and Uma’s viewpoints. Two POVs are great for plot twists and cliffhangers, but my editor asked me to consider writing the novel in a single POV from Uma’s perspective. The huge challenge had me sweating bullets, but it made the novel trimmer, and I loved the end result.

Do you think we could learn from each other?

Helen: I’m sure we could. Actually, it might be really interesting to try writing something together. Maybe I could soak up some of your lush word count and you could learn from my lean-and-mean style. You mentioned cutting and adding characters. I’ve worked with two different agents, and both of them have had me add at least one new character to my novels. In both cases, I was asked to add a “decoy boy” – an apparent love interest to deflect attention from the boy that the main character ends up with. I am so focused on where the story is going to end up that I beeline for the final outcome. As a result, I get a bit too obvious sometimes.

Janet: I’m going to pull a quote from your blog post because I’m interested in your idea about the way we write reflecting the way we live. “In pondering my agent’s challenge, I realized that my propensity toward “fast and tight” relates not only to my writing but to the way I live my life. I’m one of those people who is always in a hurry. Perhaps because my childhood experience of cancer left me with an awareness of my mortality, time feels like it’s at a premium, and as a result, I tend to rush through both tasks and interactions in my urgency to move on to the next thing.” Can you talk more about this and let us know what the process taught you?

Helen: Sure, I’d love to talk about that. Because I have encountered the suggestion to flesh out my work so many times, I decided to take a step back and think about what that meant for me personally. What I realized was that, just as I rush toward the end result in my novels, I tend to approach things in other parts of my life in a product-oriented way. Give me a to-do list, and I’m all over it. I like to get things done, and get them done stat! But being asked to slow down in my writing, to not be afraid to take detours or describe things more fully, has made me aware of the times I could stand to apply this to my life, as well.

Janet: That’s beautiful. I know I learn something new each time I begin a story. A novel is a quest to answer a deeper question that can only be addressed through story with characters who are determined to work it out. For example, the quest in IN THE TIME OF DRAGON MOON grew out of the question; “What happens when you are asked to heal your enemy?”

Until this conversation, I hadn’t thought of the revision process as something that can teach me something other than how to strengthen my craft. Thank you for that.

Helen: You’re so welcome. I’m honored that I can teach anything to an illustrious author like you. I’d like to mention another interesting thing about the connection between my revisions and my life. My current agent has been working with me to add more emotion to my scenes. My manuscript comes back with hundreds of comments saying things like “What’s she feeling here?” It’s fascinating to me because I always I assume I’m putting that emotion on the page. 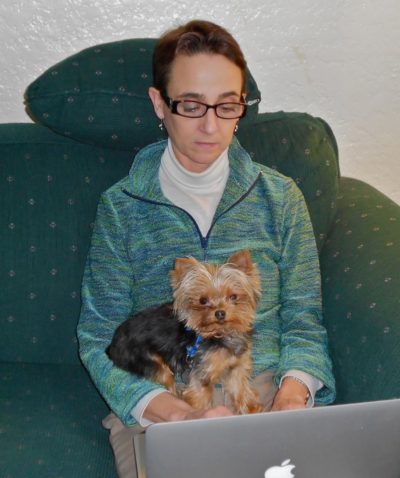 In “real life,” people often comment on how calm and in control I seem. Often, I don’t feel calm at all – they just can’t see the roiling cauldron of emotion bubbling below the serene exterior. So, in both my writing and my life, I’d like to open myself up more, make myself vulnerable enough to show my emotions through my own demeanor and through my characters’ responses. 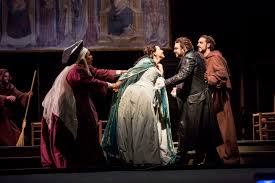 Janet: I get that. I love my therapist, but I’m always uncomfortable when she asks, “how are you feeling?” I’d rather talk about my stories or my characters. It might be helpful to practice some emotional vulnerability on the page (in drafts no one else sees) as small steps toward practicing it in life. I write to “try things on” like an actor getting into character. Case in point: I’m a peaceful person, but I love writing fight scenes. I type with fury! Characters say and do things I wouldn’t dream of doing in real life. Cathartic. A blast!

Helen: Interesting that you bring up acting because I was a theater major in college. Before I started writing, I wanted to be an actress. Writing and acting are so related. And of course, the critiques I used to get on my scene studies in college acting classes were the same ones I get on my manuscripts now: “Take your time; don’t rush through the scene.” “Bring the emotion to the surface where we can see it.” At least my acting teachers didn’t ask me to create whole new characters!

Janet: Ha! Ha! That’s great! Have you considered writing a novel about a girl/boy in a Rush? Just playing here, but you could explore all these critiques through a character who has to slow down for some reason. Hmm . . .

Helen: Interesting idea! I thought you were going to ask if I’ve considered writing about a girl who wants to be an actress – which, in fact, is the subject of my latest novel, now out on submission. I don’t explore the rushing issue in that novel, but the main character does have to learn how to be emotionally vulnerable, both in her acting and in her life. Like you said earlier, the writing of each novel is a quest to resolve an internal question through a character or characters. Maybe I’ll take up the question of “How do I learn to slow down?” soon.

Janet: It’s exciting to hear about this new novel out on submission. What’s the title?

Helen: The working title of my novel on sub is CLEO. The main character, Joan Levinsky, has an alter ego she calls Cleo, short for Cleopatra. When she’s being Cleo, shy, awkward Joan is confident, sexy, and a bit outrageous. Through the course of the novel, she learns to bring the Cleo qualities into her life as Joan.

Janet: What an intriguing idea for a teen novel. I love the description of Joan, and her alter ego Cleo. I’m sure someone will snap this up. How did your own acting experiences play out in the novel?

Helen: I hope you’re right and that an editor will fall in love with CLEO. I’m very proud of the work I’ve done on it. My experiences with drama informed so much about the novel. One of the opening scenes takes place backstage during a rehearsal of “Damn Yankees,” the very musical we did in my high school drama production class. Joan studies the Linklater Technique, a vocal technique I studied in my theater classes in college. All the camaraderie and rivalries, all the dreams and aspirations of the characters came directly from my time as an actress. (Helen in costume as a tavern wench for a production of Shakespeare’s Henry V at the Old Globe Theatre in San Diego) 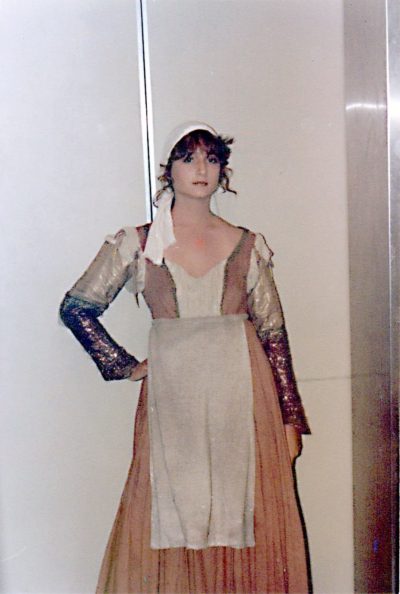 Janet: This brings us around to where we began, I think. The process of writing affecting our lives/our lives affecting our writing. Perhaps the challenges you and I both face when we hit the revision stage has to do with making what we’ve created more accessible to the reader — whether that requires fattening the manuscript up or trimming it down. Because, bottom line, we’re writing to share these stories with others.

Helen: So true! It’s all about translating those personal quests into a story that sparks readers to embark on quests of their own.