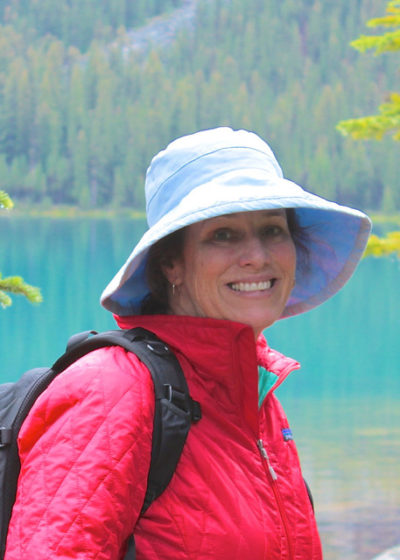 Laura’s stopping by to share her newest book with us. 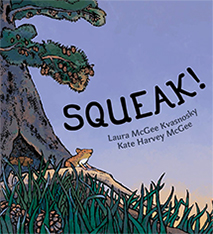 Praise for Squeak!
“The text is melodic and vivid [and] a joy to read aloud . . . A surefire hit for storytime, one-on-one reading, and gift giving.” — Booklist (starred review)

Janet: We’re so happy you stopped by, Laura. Can you tell us how your newest book came about?

Laura: So far, in my 28 years of making picture books, a ‘next’ idea has arrived before a previous project winds up. So it was with SQUEAK!, though my friend Bonny Becker had to remind me of it. 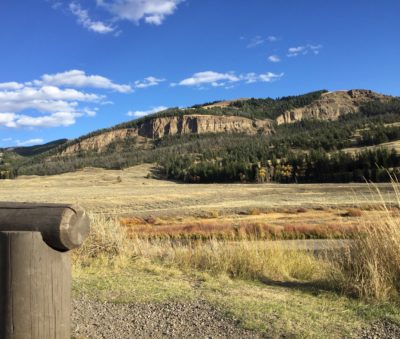 The seed for SQUEAK! first sprouted when my husband and I were visiting Yellowstone National Park. We had traveled there to take reference photos for my previous book, LITTLE WOLF’S FIRST HOWLING. 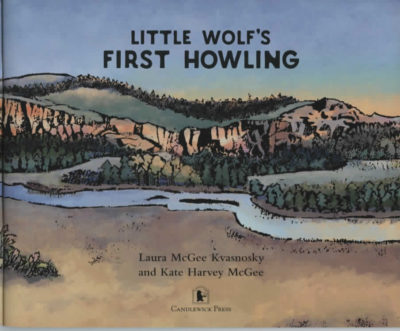 We were awed by the sheer number and variety of animals who make their homes in Yellowstone — from mosquitos to bison. And I got to wondering if one of the little animals – a mouse, as it turned out – could wake the whole place up through a sort of Rube-Goldberg mechanism of cause and effect.

Later, when I was working on the illustrations, I saw the story points to something deeper: how interconnected the world is, no matter what you consider. For instance, there is a great video about the reintroduction of the wolves to Yellowstone that demonstrates how that change impacted the whole ecosystem there, even the landscape and rivers. Our present climate crisis and immigrant situation also point to this truth. “We are in this together,” is how my friend Elizabeth Conlin put it and that became the epigraph for SQUEAK!

Janet: Thank you for creating a story that brings that interconnectedness to light in such a celebratory way, Laura. I’m curious about your creative process as both an author and an illustrator. When you’re first thinking up a story, does the drawing come first, or do you begin with words?

SQUEAK! is my 20th children’s book project and, as I wrote above, it began with the idea. I worked first with the words, puzzling out how one animal after another could be awakened and then wake up the next. I usually work with words first, maybe because I came to this career through the writer’s door, with my journalism degree and reporter’s background.

But some of my stories have come out of drawings, as well. Many of the Zelda and Ivy stories – a six-book early reader series, three chapter/stories per book – came out of my experiences growing up the middle of five kids. But others were born in my sketchbook as I got to know my characters. For instance, I would draw Ivy falling down laughing and then think – what is so funny? What might she be saying? Sometimes a drawing gives you a story. 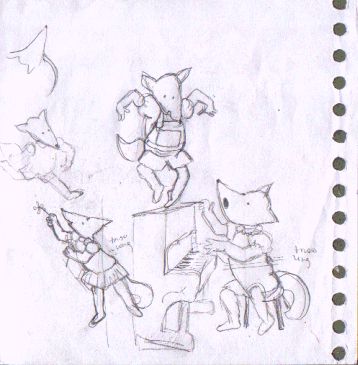 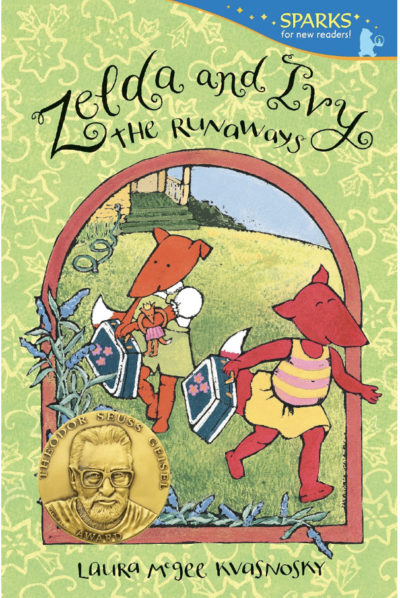 Also, I admit I am an inveterate eavesdropper and pick up good lines here and there. Like this one, which I have yet to use, from a hike to the Grove of the Patriarchs where three little girls were playing: “I’ll be Princess, since I have golden hair.” I collect what I think of as story-laden lines like a raccoon hoards shiny objects. Who knows why they ring my story alarm? Often an overheard line works like a magnet and draws other pieces of story to it.

LITTLE WOLF’S FIRST HOWLING came out of playing around with a new wolf puppet. Turned out he had his own way of howling, which cracked us up so I found a story to build around that. 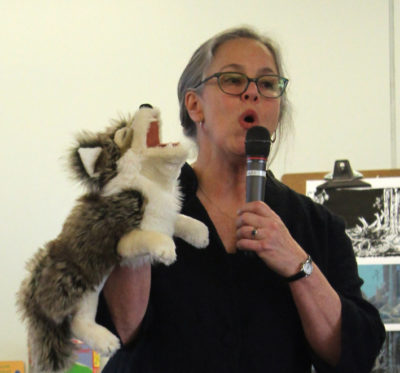 All these ways of developing a story involve play – puzzling with words, doodling and drawing, gathering snippets and figuring out how they can connect, actual playacting with stuffed animals. I think play is the key for me.

Janet: This is the second picture book you’ve done with your sister, Kate Harvey McGee. 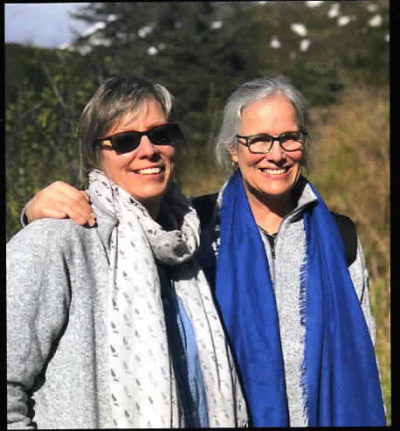 Can you tell us about the collaboration process?

Laura: When my sister Kate retired from her job as a landscape architect, she set up a studio in the lower level of her house and began to paint with pastels. She took herself seriously, attending classes, workshops and plein air painting seminars. Over the years her work continues to bloom. I suppose it is no surprise, with her landscape design background, that she is especially good at interpreting landscape: some of my favorite of her paintings are the hills and trees around her home outside Philomath, OR. 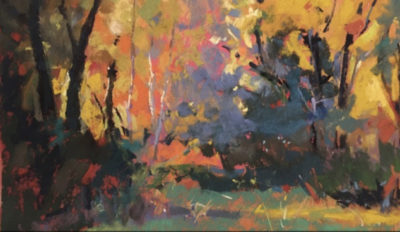 Even then, we had to invent how we would work together. We knew we could combine our work in layers through Photoshop. Only problem? I did not know how to use Photoshop. Luckily, Kevan Atteberry offered to coach me. SQUEAK! was created with the same process we used for Little Wolf. I write the text, sketch thumbnails and dummy.

Kate makes suggestions to improve composition and flow at each stage. As does my wonderful critique group. (Julie Paschkis, Bonny Becker, Margaret Chodos-Irvine and Julie Larios). Then I do the first step of the final artwork, using actual paintbrushes, white gouache paint and black India ink. 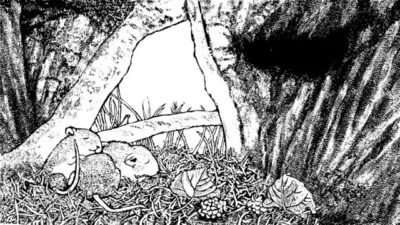 This I scan, doozy up in Photoshop and send on to Kate for coloring. 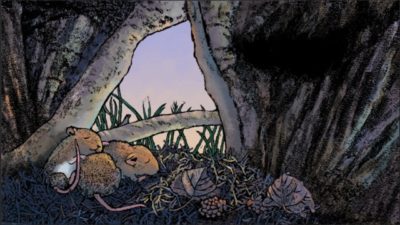 Kate creates a pastel palette in Photoshop for each book. She puts my black and white layer on top, and paints in layers underneath digitally, building up the color for each book. I especially love how she paints the light at the edges of day.

Presently we are working on our third picture book project, OCEAN LULLABY, which will be published in summer 2021. Like SQUEAK!, it is with Philomel books.

A side benefit of working with Kate is we can help each other recognize when an illustration is done. In the ultimately-tweakable world of Photoshop, this can sometimes be a challenge. Plus, best of all, we completely trust what the other is bringing to the table. It has been a great joy in our sisterhood to make these books together. 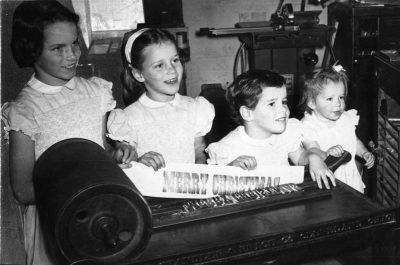 Janet: Thank you so much, Laura, for stopping by to share with the Dreamwalks readers.
Watch the SQUEAK! trailer