Welcome to Library Lions interviews. Author Annette Laing is here today to share her books and ROAR for Libraries. 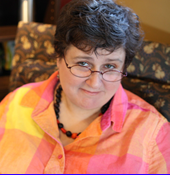 Roar. Oh, sorry, you wanted that louder? Um, OK. ROAR. Sorry. I don’t like to make a scene: I’m a Brit who was raised in the 1970s, when kids were expected to be quiet in libraries or else endure the Librarian Death Stare. Don’t get me wrong, though. I could have done nothing in my life without libraries and librarians: I trained as a journalist, hold a PhD in early American history, am a published historian, and am best known as author of The Snipesville Chronicles, 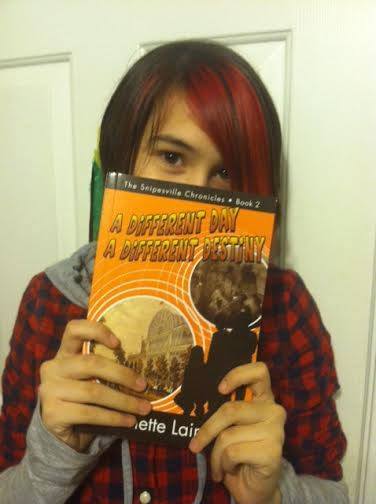 my MG/YA series about reluctant time-travelers from a small Southern town who ricochet through time from America to England, and have no idea why. Libraries and librarians made all this possible.

Author’s Roar
Nobody can be an academic historian without depending heavily upon libraries and librarians. I continue to rely on academic libraries to write my time-travel novels. I love how librarians weigh me down with material: Like them, I don’t expect to use it all, but my being familiar with a wealth of primary and secondary sources adds so much color to my stories.

Funding for libraries, especially school libraries, is currently under threat. As an author, what are your thoughts about that?
Closing libraries in communities and schools is insane. Libraries, not stupid testing regimens and straitjacket curriculum, are key to kids’ developing a life of the mind, and to becoming independent thinkers. We forget that education isn’t a science: It’s more like alchemy, and libraries are an essential part of the magic that produces educated people. As an academic historian, I also treasure librarians as the safari guides who lead me through the tangled mess of tall stacks and web foliage to find what I need.

A Lion’s Pride of Programs
I don’t just talk about my historical time travel when I visit schools and libraries: I make history!

My Non-Boring History programs, like Could You Be A World War II Kid/Teen?Could You Be A Colonial Kid? invites readers to imagine themselves in place of my characters, traveling to places like a small town in England in 1940, or experiencing life in America in 1750. 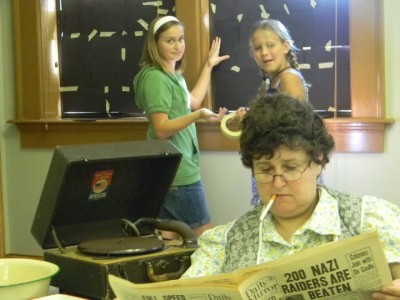 Using costume, role play, music, multimedia, prizes, and props that range from eighteenth-century documents to deceased weasels (don’t ask), I approach my presentations in the same playful spirit with which I approach my novels. 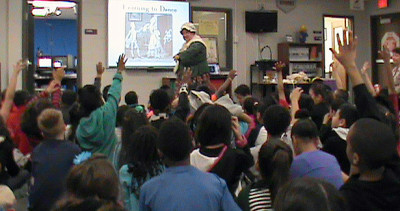 I may have a PhD, but I’m not proud. Oh, and I also offer A Writer’s Life for those who prefer I talk about the writing process, but I sneak historical thinking into that one, too, because I am on an unstoppable mission! 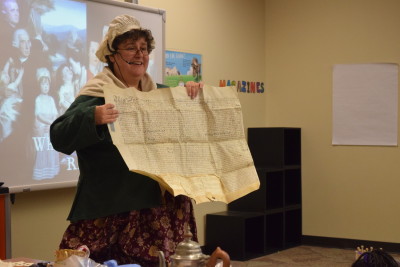 When librarians host me at schools and libraries, and introduce readers to The Snipesville Chronicles, we all work together to inspire kids, teens, and adults with historical thinking, which is a hallmark of the series. 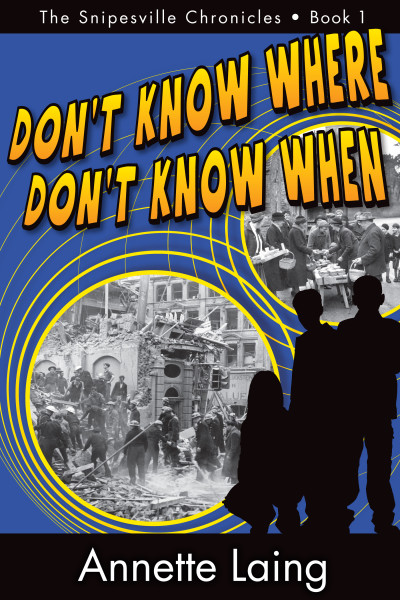 In Don’t Know Where, Don’t Know When (Book 1) Hannah, Alex, and Brandon find themselves caught up in the lives and secrets of a small English community in two World Wars. 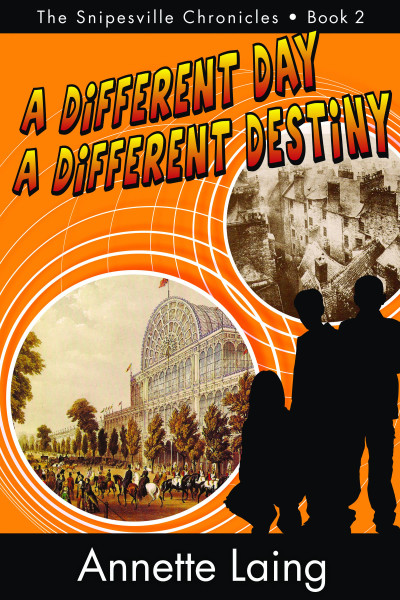 A Different Day, A Different Destiny (Book 2) leads the three on a complicated journey through industrial Victorian England and the Slave South, while Look Ahead, Look Back ( Book 3) finds them in the dangerous waters of backwoods America in 1752. 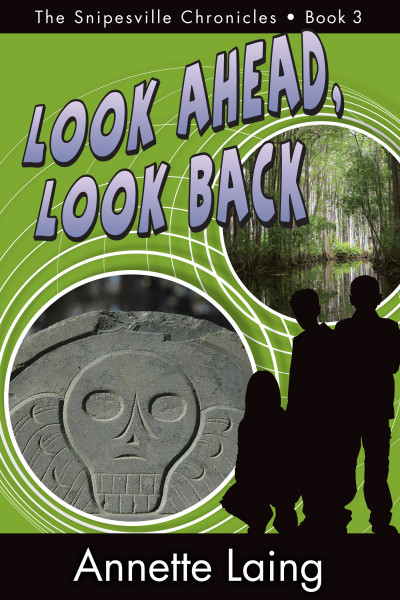 One Way or Another (Book 4), the final entry in the series, will involve them in two very different kinds of drama in the Edwardian era: the travails of a middle-class girl and her family in England, and a small Southern community moving toward disaster. My goal in One Way or Another is to make my readers think, gasp, and then send them racing back to re-read the series.

Here’s a picture of me dressed as a Highland warrior for a costume contest. 🙂 I won. 😉 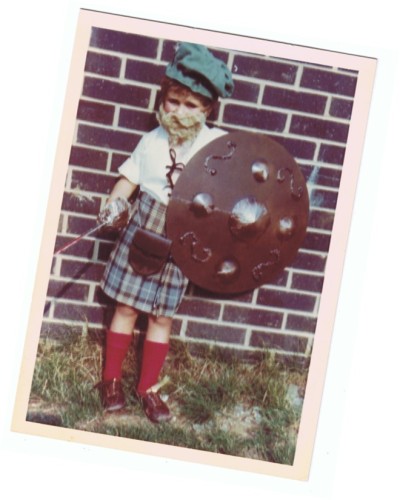 So many lovely library memories! We lived quite far from our town library in England, but a mobile library stopped down the street from my house every week. In 1974, when I was ten, I watched Shoulder to Shoulder, a BBC drama about Emmeline Pankhurst and the militant Edwardian women’s suffrage movement (also the subject of the new movie Suffragette). I don’t know how the librarians managed to stuff such a great selection of books in that tiny van, but they did indeed have a few books on the suffragettes, and I vividly remember how excited I was to check them out. There’s pretty much a direct line from that moment to my becoming a published historian, and a time-travel author. I should also mention my school librarian, Mrs. Decent, who lived up to her name. Not only was she kind and helpful, but she also gave us access to the much-frowned-upon Judy Blume novels. So maybe we should have nicknamed her Mrs. Indecent. 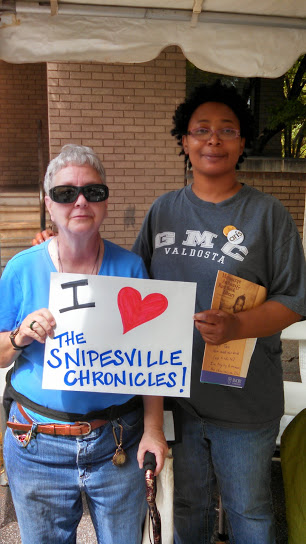 I have spoken several times at COMO, addressing meetings of the Georgia Library Association and Georgia Library Media Association. All talks were delivered in an authentic British accent, because I don’t know how to sound American. COMO meetings introduced my books and programs to librarians like Gordon Baker, President of the Southeastern Library Association, Dusty Gres, then-head of the Ohoopee Regional Library System, and the Henry County Gang (the lovely Henry County Library System librarians, who have done so much to get my books into readers’ hands, with a special shout-out to Kathy Pillatzki, Deborah Walburn, and Aimee Leavitt) Among the many school library media specialists who have gone above and beyond to promote my books and host my programs. 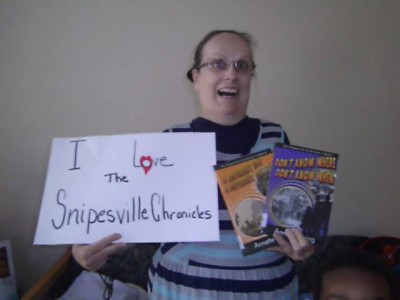 A special hello to Kristi Craven, Cristina Dover, Jan Perry, Lori Shiver, and Karen Hickey. And a BIG P.S. to the Tennessee Association of School Librarians, where I have lots of fans! 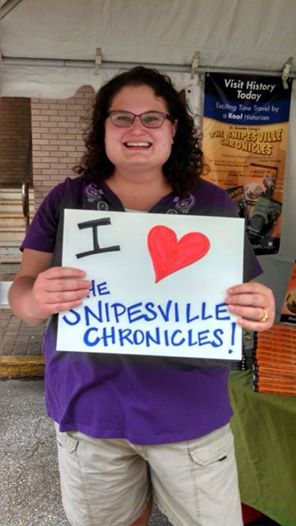 Library Lion’s Roar: ONE LAST BIG
I was an early contributor to the Geek the Library campaign, writing advocacy pieces for local newspapers in South Georgia. I continue to roar (in a British sort of way) for libraries and librarians every chance I get, for one simple reason: Libraries and librarians are not luxuries. They are essential.

Note to Librarians: If you’re a Youth Librarian working in a school or public library we’d love to hear about you and your library. Email Janet via the Contact page on this website to set up an interview.
Note to Authors: If you’re interested in Roaring for Libraries on this blog, contact Janet.