Please Roar today’s guest, author Carole Estby Dagg!
Carole has stopped by to share her Library Love with us, and what better person to do that than a former librarian turned author!

A Bit of Background – Carole the Librarian
Carole started volunteering in her school library in 1952, later she worked her way through the University of Washington at the NE Branch of the Seattle Public Library in the early 60’s, earned her library science degree at the University of British Columbia, and has seen school, academic, and public library operations from the standpoint of volunteer, page, circulation desk clerk, children’s librarian, branch manager, and assistant director.

And Now Author!
She crossed over to the other side—the writing side—with her first book after she retired from Everett Public Library. 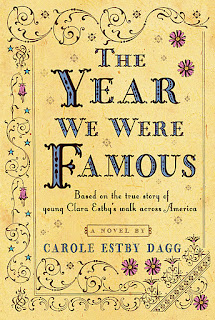 The Year We Were Famous
“Would you walk over four thousand miles to save your family’s home?”
(Clarion Books, 2011)

Tell us about Your Library Love When You Were a Cub
In fourth grade, I looked forward to Thursdays, when my teacher let me spend most of day in the school library. Then, as now, school libraries were understaffed and librarians appreciated unpaid help from eager wanna-be librarians.

“Carole the cowgirl” this was taken a couple years before I started volunteering in the school library; 1950 was the year I met Great-aunt Clara.

I read to kindergarten and first grade classes as they came in, checked books in and out, repaired books, and processed new magazines. I loved rotating the date due stamp to the next due date, the smell of library paste, dipping the metal nib of a wooden-handled pen into India ink to letter date due cards, and most of all, having younger kids calling me the ‘library girl’ on the playground.

More Library Love
The Year We Were Famous couldn’t have been written without the help of the librarians across the country who scrolled through microfilmed newspapers of 1896 to locate articles about Clara and Helga Estby (my great-aunt and great-grandmother) as they passed through on their 4,000-mile walk from Spokane, Washington to New York City. 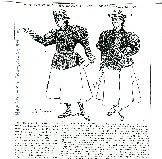 For each chapter, I checked out armfuls of books—often children’s books with lots of illustrations—on everything from President McKinley to the eating habits of cougars. When The Year We Were Famous came out, the biggest event was at my home-town library, where the staff made me feel like a rock star, with my name in lights on the reader-board. 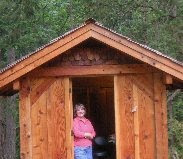 Here is my writer’s shack. I currently write in Everett, and a converted woodshed on San Juan Island library.

Author’s Roar
School librarians, with their involvement in Battle of the Books and reading circles, encourage love of reading—the basis for the lifelong learning students need. I saw first-hand how understaffed school libraries are when—after retirement from the local public library—I volunteered a morning a week at the local elementary school. The school librarian had a steady stream of classes coming in, so she had no time for collection maintenance. After I had weeded the entire collection, tossing geography books on Africa from the 1960’s and sports biographies of people who were stars before even the students’ parents were in school, the shelves so bare the PTSA had to organize a series of fund-raisers to replenish the shelves.

When I worked at a public library branch where nearly a third of the users were new to this country, I saw whole families came in for materials for the citizenship test and videos and DVDs that were the Rosetta Stone of learning a new language. I felt almost maternal joy when I saw a child who had known only a few words of English three years before come into the library speaking with nary an accent and acting as translator for his grandmother…or when an immigrant’s daughter who had been in my preschool story hours came in a dozen years later for materials for her research paper on Freud.

Hooray for ALA!
ALA is the most important link between publishers, writers, librarians, and readers. My most memorable conference was in Seattle of January, 2007. As I came up to the Society of Children’s Book Writers and Illustrators booth, I found out that one of our own, Kirby Larson, had received a call that morning to tell her that her book Hattie Big Sky, had been named a Newbery Honor Book. I also took advantage of having so many publishers in one place to talk to representatives of publishers which had expressed interest in my manuscript – and ended up shaking hands with Jennifer Wingertzahn at Clarion Books, which ultimately published The Year We Were Famous.

A Lion’s Pride of Programs
I love bookstore programs, but not every child has transportation to bookstores and the money to buy books. School and public libraries provide the accessible link between authors and their readers. As a children’s librarian in a public library, I visited all the classrooms in the area to share my favorite books and talk up the summer reading program. As a new author, I’ve already talked to roughly seven hundred middle school students in their schools. As a member of The Class of 2k11, I visited libraries in New York City during Book Expo America Week. 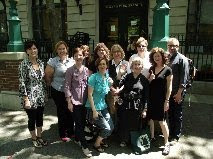 The photo is in front of the Seward Park Branch of NYPL; I’m the one waving in the front row.

My Favorite Librarian
My daughter, Emily Dagg, of course! 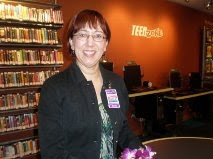 She’s carrying on the mission of bringing children and books together and following literally in her mother’s footsteps by having worked in three of the libraries I worked in many years ago. As current head of children’s and young adult services for Everett Public Library, she has been involved in a series of fundraisers to create a new teen area. Here she is, showing off the new teen area at EPL.

Thank you,Carole for sharing your story and Library Love with us.