Daisy Rearick, Reference Librarian/Periodicals/Microforms at Pickler Memorial Library, Kirksville, Missouri, is here to tell us about the Lit Fest! Daisy grew up in Mexico. She loves children’s books. Welcome Daisy.

Share Your Dream with Us.
The purpose of the Children’s Literature Festival is to stimulate an interest in reading and literature among young students. The festival provides an opportunity for children from the northeast Missouri region in grades 4-6 to meet and interact with authors and illustrators from around the country. 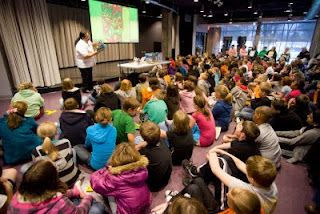 We lost the Festival for a few years. What Happened?
The Children’s Literature Festival was an annual event for 21 years until 2004 when it was discontinued due to severe budget cuts. In 2007, a Children’s Literature Festival Fund was created in an effort to bring the festival back, and two years later, the event began taking place once again. For the past two years, the Festival has also received grants from the Institute of Museum and Library Services and Technology Act as administered by the Missouri State Library, a Division of the Office of the Secretary of State.

We’re Happy to be back up and running now! 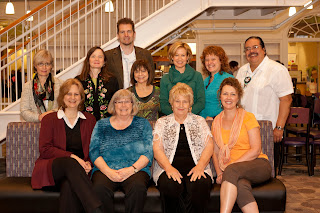 Tell the LL readers what happens on the Festival Day.
During the festival, the fourth-, fifth- and sixth-grade students have an opportunity to meet with three authors and ask them how their work was created and came to be published. The authors present fun workshops inspiring students’ love for literature, encouraging them to explore their own writing and drawing projects in school and out. 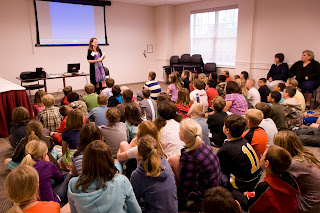 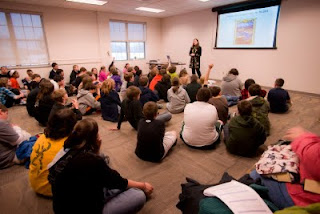 We also have a book signing 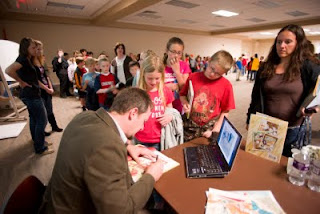 Ard Hoyt at the book signing

Cheers for the Children’s Literature Festival at Truman University!

~ “Lots of kids don’t enjoy reading and this [festival] is another tool to encourage them to make it “cool”. Many students from Northeast Missouri don’t get an opportunity to travel and hear speakers other than school trips, so they are that much more engaged.” From a teacher.

~ “I cannot think of any other chance I have had as a student, and can think of few occasions I will have as a professional, that will provide me with such a unique chance to connect with so many different types of professionals all so concerned with literacy.” From an MAE student

~ “Thank you so much for inviting me! The young people were wonderful, and I hope that a few went away inspired. And the committee – I applaud all of you. Through your hard work and organization, the Festival ran seamlessly.” From an author who presented 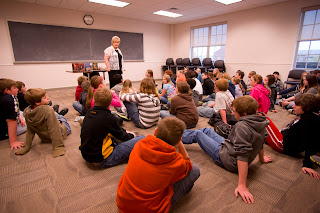 Readers Roar. Let’s hear from the kids!
~ “It has inspired me to want to try to write a short story.” Anne – Grade 4

~ “at the lit festival, I feel so inspired to read more books and learn more about authors.” Ben – Grade 6 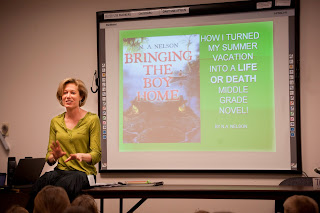 ~ “[I have changed how I feel about reading] because authors get their ideas from real events, and it makes me wonder what things go on in the world.” Student

~ “it changed how I feel about reading or books or authors because I learned to always have a problem.” Student 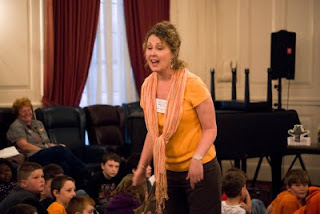 Library Lion’s Roar: ONE LAST BIG ROAR
We already have seven of our authors lined up for the 2012 Literature Festival, and we are thrilled to once again have a state grant to help us out with the expenses!

Thanks again for the terrific interview, Daisy!