Welcome to Library Lions interviews Raising a Roar for Libraries and for the outstanding Librarians serving Children and Young Adults in Schools and Public Libraries across the U.S. Please Roar today’s guest, Elizabeth Bird!

Elizabeth is the children’s librarian at New York Public Library, Stephen A. Schwarzman Building! Here are the famed Library Lions of NYPL! 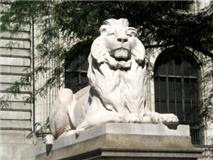 Elizabeth has been a children’s librarian since 2004. Her famed blog A Fuse #8 Production is hosted by School Library Journal. She served on the 2007 Newbery committee, and writes reviews for Kirkus, School Library Journal, TimeOut Kids New York, and sometimes the New York Times. Librarian by day, writer by night, Elizabeth has sold two picture books to Greenwillow, a non-fiction adult book about the true stories behind your favorite children’s books which she is writing with two other bloggers to Candlewick, and an informational title for librarians with ALA Editions. Elizabeth was on the November 2009 cover of School Library Journal, as well,there was an article about her in Forbes Magazine in February of 2010. We are honored to interview her today for Library Lions!

The Skinny:
Elizabeth says, “I work in the best children’s room in New York City.” But she didn’t always feel that way. “I fought tooth and nail against ever becoming a librarian. I’m serious. When I was a kid I was the kind of child that would create cataloging systems for the family’s VHS tapes. I alphabetized the family’s books by author. I even tried to create subject headings for my National Geographic Magazines, long before I knew what a subject heading was. In college, I rebelled. I got a major in Fine Arts with a concentration in Photography (though I also majored in English, so clearly I was hedging my bets). Finally, after years (one year) of realizing that I didn’t want to do anything with photography that would actually pay me, I threw in the towel and went to library school. Which, obviously, I adored.”

In terms of my work, I really love getting my books into the hands of readers. So much so that I’ll spend hours making sure that we have the maximum amount of books on our shelves, just in case there’s a reader about with a penchant for the additional works of Kenneth Grahame and such.

Readers Roar:
Here’s one of the children from a bookgroup I run. She was featured in a YouTube video my library put out thanking the people of New York for helping us overcome our recent budget cuts.

As she says, “Thanks for saving the bookgroup.” – Annie, 2nd grade. Ain’t she a cutie?

Library Laughs: What’s your favorite funny library story, Elizabeth?
Ever? Oh, this one’s good. It’s a true story and it happened to a friend of my husband’s. It’s not a public library story, but I think folks can appreciate it anyway.I went to a small liberal arts college in Indiana, and typically when winter break rolled around some kids would go home and some would stay at school. Two girls were working the circulation desk of the college library when my husband’s friend noticed them. Thinks he: “Aha! I have a chance with these girls!” and he proceeds to make himself obnoxiously present for days at a time. They just want to get some work or studying done, and there he is. Wanting to chat.

In the course of one of his chats, he mentions oh-so-casually that he’s staying off-campus and if they ever want to visit he never locks the door. They pay attention to this fact, because by this point revenge is at the forefront of their minds. So one day they determine when he will be out and they go to him home with a big box of tattletape. Those of you who have worked in technical services will remember that tattletape is the long, think, and sticky metal strip that folks put in books so that they’ll set off the library’s alarm. And in my library they had those bars you had to push through to exit the building. So in the event that a person had not properly checked out a book, an alarm would sound and the bar would stop the person from leaving.You probably see where this is going.

That night the two girls placed the tattletape in all the guy’s clothes. And I don’t mean in a rush job either. I mean in the cuffs of his shirt. The inseam of his pants. The inside of his hems. By the time they were done, most of his clothes had tattletape in them. Then the fun began. The first time he visited them in the library, nothing happened. They had missed that batch of clothes. He was probably pretty flattered by how closely they watched him leave too. The second time he visited, however, off went the alarm. He studiously emptied out his bag entirely for the miscreant book, only to find nothing there. So they let him out. Then it happened a second time. Then a third. Every time this guy came in the library he was setting off the alarm.

Eventually, he couldn’t take it anymore. So one day, after the alarm went off, he began to try to figure out what the rogue element was. He tried walking through without his bag. Off goes the alarm. He removes his shirt. Off goes the alarm. Before the girls knew it, the guy was performing an elaborate striptease right in front of them, desperately trying to get rid of whatever clothing it was. At long last he stood there in only his underwear . . . . and made it through.

By that point they just had to tell him, and they did. A prankster himself, he was thrilled at the explanation. I suppose that at some point he worried that he had magnetic blood. Now every time I go through a security gate in a library, or even a store, I think about that story. Whatever you do kids, don’t make the employees angry with you. Their revenge could be epic.

A Lion’s Pride of Programs:
My favorite program is one that was started by Rebecca Schosha and Sarah Couri at my previous library, and that I’ve picked up. The Children’s Literary Salon is a monthly series of talks with people in the children’s literature field on a variety of topics. We’ve had everything from New York Times reviewers of children’s literature to playwrights who have adapted children’s books to the stage to female graphic novelists to scholars. Every month it’s different, and every month it’s interesting. It’s just for adults too, so anyone with a love of children’s literature can attend and hear a variety of folks speak about the field. It’s unique and a lot of fun.

Reaching Readers:
I thought I’d show you some readers circa 1913? 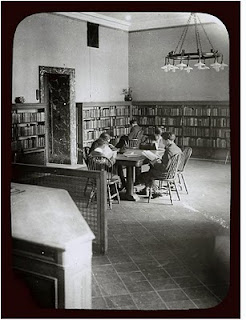 We see a lot of kids on a daily basis, partly because we have so many tourists. But on a local level a lot of classes and teachers like to bring their kids to the library for programs and tours. Since we have so many authors in the area, it’s fun to bring in kids to see a special author or illustrator talk on a program. We also give tours of the building and tell folks about all the stuff the library provides. As for myself, I do the toddler and preschool storytelling programs, which are a lot of fun.

Book Brag: What books are flying off your shelves this year and why?
Movies always make certain books hot, so right now I’m seeing all my Ramona books checked out. They usually go during the summer months because of reading lists, but not ALL of them! So thank you Ramona & Beezus! Also, I still can’t seem to keep Diary of a Wimpy Kid on the shelf. We just bought about ten new copies of the books, and they disappeared entirely after two days. Amazing!

Author! Author! Describe the perfect author visit from a librarian’s point of view.Oo.
Excellent question. The perfect author visit comes when an author wants to visit my library, free of charge, and we happen to have a Saturday open for them. If they’re an illustrator then they do lots of great drawings on our sketchpad both for and with the kids. If they’re an author, then they know how to make the kids laugh. And no matter how you slice it, the best visits are from folks that are former teachers. The kinds of people who know how to command a room full of antsy kids. That’s the definition of my perfect visit, anyway.